The skin of a saveloy used to be made from pig intestines that came in a huge barrel of salt. The skins were soaked in cold water to make them pliable and then loaded onto the nozzle. The raw saveloys were then cooked in dye filled tanks. This gave the saveloy its red skin which also permeated inside giving the meat a pinkish colour. 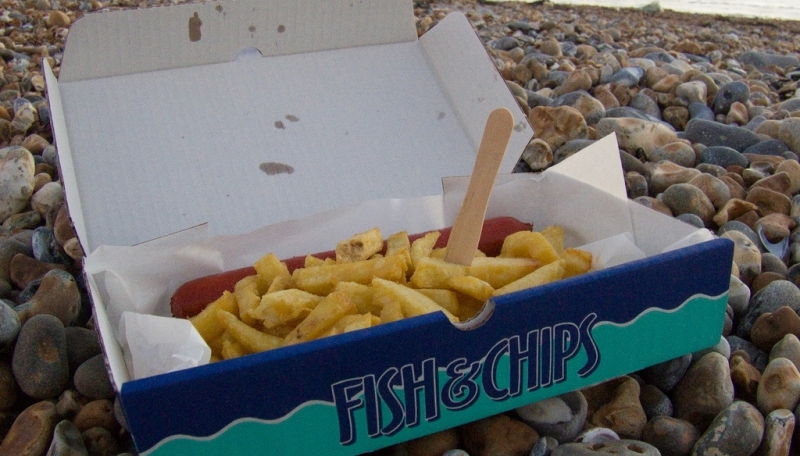 Nowadays the skin is synthetic and is still artificially coloured. The red colour comes from the sweating process with saltpetre (potassium nitrate), which is a common food preservative and additive.

The exact origins are lost to us but the word is thought to come from a french word ‘cervelas’ – meaning short thick sausage, and an older French word ‘servelat’ and originating from the Latin word for brain; cerebellum.

Cervelas is thought to have been first made from pigs brains, hence its similar naming. Also originating in southern France, in Savoi, we find the savoy cabbage. Could this be more than a coincidence and a link to the history of the sav-el-oy. It is also food for thought that another French word ‘savo-ur-y’, coming from the old French ‘savoure’ describes a food which is salty, and originating from the Latin word ‘sapor’, to taste.

Saveloys are sometimes described as a highly spiced sausage – but wait, that would be a salami, saveloys are not highly spiced, they are salted. The salt in the main having come from the preservation of the instestine skins in the barrel. They can be made from beef, pork or chicken, usually from mechanically recovered meat, with added starch and chochineal for artificial red colouring.

This is the ingredients list for Hellers saveloys, a New Zealand butchers:

So already we see items we might not want to see; potassium nitrate and niacin for example. Satpetre (a white crystalline compound used in gunpowders, pyrotechnics and fertilizers – and as a preservative for foods, E252). Dangerous in high doses. Nacin can cause serious effects (gastrointestinal events such as diarrhea and ulcers and chronic itching). Niacin is a blanket term for a family of compounds with vitamin B3 activity.

Many public health organisations around the world make B3 recommendations in terms of “milligrams of NEs” per day. Niacin is available through the foods we eat each day so you do not need additional sources like for example in enriched rice and wheat flour, niacin being the typical enrichment.

Nutritionally the contents of a saveloy vary but the table below is an average guide. Saveloys come ready-cooked and just require heating through. Removal of the skin is very easy but part of the experience of eating a saveloy is the skin texture when you cut and bite into it. Eat a saveloy without the skin and it becomes a different and less enjoyable experience.

Best fried, grilled or barbecued, they can also be simmered gently and oven baked. Microwaving dries the saveloy out and bursts the skin. Deep frying and rapid boiling also bursts the skin. For boiling, bring the water to the boil, turn down to a slow simmer then add the Saveloy and heat through until hot.

Do not re boil the water, as this will cause the skins to split. After boiling you can fry or grill for a minute if a crispier skin is preferred. All that is required is to apply heat without bursting the skin, then serve with chips and that’s it.

You must eat your saveloy hot, many sold in chip shops tend to be warm. This is mainly due to the fact that fish and chip shops, particularly in the cities are no longer run by British owners, it’s just a business – no longer a tradition, so profits often outweigh quality. But of course there are a few cracking outlets still.

Does it taste any nicer bought from a fish and chip shop – no. All the chippies I have ever been to have served warm saveloys. It’s way better making saveloy and chips at home. Another myth is that it is sometimes eaten with batter. Most fish and chip shops sell battered sausages but saveloys are normally not done this way unless asked for.

The saveloy is often described as being available in English fish and chip shops, tasting like a frankfurter and being dunked in what is called a “saveloy dip”. Nothing could be further from the truth. Firstly, there is no such thing as a saveloy dip and secondly, it tastes nothing like a frankfurter. It’s a simple salted sausage. What makes it different from a salami is that it is not highly spiced and where it differs from a standard sausage is the way the meat and skin are processed. Best seasoned with salt and vinegar.

What’s in a saveloy

Not long ago when saveloys were made with real animal intestines, ready made pies were also delivered to fish and chip shops because fridges were not so widely in use. Saveloys came together from scrap meats and bits recovered from meat processing cutters, slicers, mincers and the like. If a saveloy burst during cooking or wasn’t up to standard for packing, it was recycled into the next batch of saveloys.

This is where the saveloy got its initial bad reputation not least because then they were alos made from pigs brains. Any scrap meats became the peasant’s sausage, and thered skin made it look almost appetising.

More recently saveloys are formed from mechanically recovered meat (MRM). It is not meat as you understand it, but the residue which is left on the carcass after all the prime cuts have been removed. It is protein recovered from carcasses by high pressure water jet machinery after the butchering process has been completed and forms a reddish slurry resembling mince. It is then used to bulk up meat products.

To be labelled as beef or pork, it need only contain items from that animal, which may include spinal system, eyeballs and genitals. The concern in the nineties with BSE coming into the human food chain was to do with BSE in the cows’ spinal nervous system being used in MRM foodstuffs causing the human form of that disease CJD. It is still not understood the extent of MRM in the food industry during the 1970s and 1980s. It’s a similar situation to GM foods today whereby the long term effects are not known before the process is introduced into mainstream processing.

Saveloys are popular around the world. Staying true to its tradition the saveloy does not have to follow a specific recipe in order to be classed as a saveloy, it has always been a regional sausage and the flavour and ingredients can vary tremendously. In Australia and New Zealand they eat a larger size sausage than in Europe, usually served in a bun like an American hot dog. In Finland the sausage is quite large and it’s somewhat a tradition to spear it on a long fork and leave it over an open fire to cook, it’s called makkara which is the Finnish word for sausage.

Scottish red pudding is haggis-like in texture, thickly coated in batter and deep fried. The taste is said to resemble a saveloy.

I was ten when my friend asked me if I wanted to have tea at his house because they were having saveloy and chips. What’s a saveloy I asked. At fourteen I went to Finland and had a larger version cooked on a fire. Forty years later I still think about it and just have to have saveloy and chips every now and then.

Research were your saveloys come from. For example, Peters sell saveloys and I believe they sell Gillards ones too. Many chippies have reported selling double the amount of saveloys once they started using Gillards ones. Do not settle for unlabelled packets of saveloys, you can get four for a pound at the 99p shop. These cheap versions indicate a red sausage made from the worst that could possibly pass for meat and being sold as an appetising traditional favourite. Instead try Tesco deli counter, at 40p per saveloy you can’t go wrong. 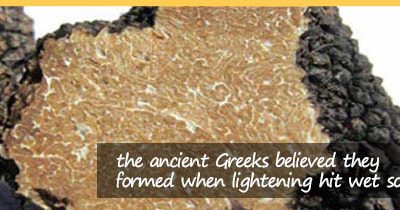 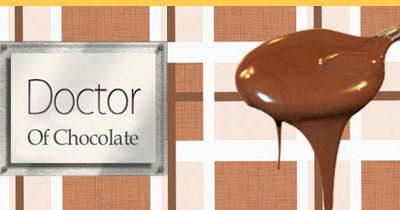 Cambridge University created a new post for a doctor of chocolate for a three and a half year project to look into how chocolate can remain solid in warm climates. The job was placed in the university’s department of chemical engineering & biotechnology.