We sometimes associate the label of ‘cocktail glass’ with the V-shaped design of what is in effect a Martini glass. A Martini is just the recipe of a popular cocktail. You see, you can’t just plonk your booze into any glass, the shape is important and there is an ergonomic science to support the validity that certain designs of glassware improve the drinking experience and enhance the taste sensation.

One reason we look to the Martini glass as the de facto for cocktails over the coupe, is that the Martini glass is relatively new and the contemporary design is simple and futuristic. On the other hand the coupe has a long history and may be considered old fashioned. Indeed the coupe was one of the first designs to stand at the party table but it has been known to circulate back into fashion every now and then.

The main reason is that as well as remaining elegant the design accommodates most drinks rather well. After all, what other glass can be placed in a pyramid style and have champagne poured at the top so that it perfectly spilleth over to each glass below.

The coupe design has stood the test of time. Its greatest popularity was at the beginning of the twentieth century when affluent society recalled it to the table during the Charleston years. It fell out of favour again in the 1920s when high society became concerned about preserving the bubbles in their drink and because the approaching art deco movement called for the re-modelling of the classical and decorative arts. By the 1960s the coupe was vieing neck and neck with the ‘Bond’ Martini glass. 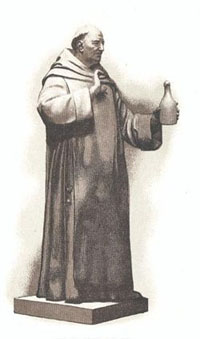 It is thought the coupe shape was originally designed for drinking champagne at least as far back as 1663. But this is only due only to the association with Dom Pérignon and his sparkling wine. Pierre Perignon tended vineyards of the Benedictine Abbey at Hautvillers and pioneering the techniques that make white wine from red wine grapes. But there is also some belief that the glass was an evolvement from the humble wide brim glass given to drinking cider.

The coupe shape tends not to suite sparkling drinks and It was eventually adopted by vermouths and mixtures of vermouths with other liquers and liqueurs which therefore led champagne and sparkling wines in the direction of fluted glassware. However, when there is a champagne event, the coupe is not considered out of place.

The rather un-alluring label of ‘champagne saucer’ does the glass no justice, indeed the word saucer is nondescript. Yet the coupe is sometimes described as a wide saucer-shaped glass, one can only wonder why. Champagne is commonly served in a flute or tulip glass but the coupe is still sometimes referred to as the ‘champagne coupe’.

It is aesthetically a vintage and timelessly stylish design which lends itself to several uses, including serving desserts. Perhaps it’s fair to say that shorter and bulkier stems make for a ‘dessert dish’ and taller and finer stems suite a drinking vessel.

The coupe shape is said to have been taken from Marie Antoinette’s left breast (the wife of Louis XVI – b1775) but of course the glass was around before her time. Empress Josephine too had a breast glass, what is more likely is that Napoleon had adjusted the coupe design to follow the shape of his wife’s breast, a custom that had been done by other notables such as Prince Paris who is said to have made drinking vessels from wax moulds of the breast of Helen of Troy.

Marie Antoinette was an Austrian-born aristocrat who married Louis XVI as a teenager and became Queen of France between 1774 and 1792. She was known to be scandalously excessive and the myth therefore lends her name to a glass type designed to drink the most lavish drink of the time, not least because the glass is breast shaped and Marie Antoinette’s teen figure may have been ‘pert’ and similar in comparison. Of course there is no evidence to support the myth but it does befit the coupe to have such an illustrious beginning, even though it may be wholly in myth.

Madame de Pompadour was Louis XV’s preferred mistress, who once said “Champagne is the only drink that leaves a woman still beautiful after drinking it.” She was a major patron of the decorative arts such as porcelain and so it’s easy to imagine that artefacts may have been modelled from her curves.

The navette-cut diamond, also called the marquise diamond was fashioned by the court jeweller of Louis XV who was commissioned to create a cut to reflect the shape of the mouth of Madame de Pompadour, a cut known as the ‘Navette cut’, (little boat). Although oval as her mouth may have been, one suspects that Louis XV may have had another part of her anatomy in mind when he commissioned the ‘little boat’ diamond cut.

Helen of Troy served wine as an aperitif it states in Homer’s Odyssey. She was the classical image of the ideal feminine beauty, who shamelessly exposed her breast to save her life. She was the face that launched a thousand ships we are told. The Roman historian Pliny the Elder writing at the time of Nero in the first century CE states that tourists visiting Rhodes could admire a chalice at the temple of Athena made from silver and gold. The chalice had been a gift from Helen of Troy fashioned perfectly in the shape of her breast, and Prince Paris is reputed to have made wax moulds of her breasts and used them to fashion drinking glasses.

The coupe is further associated with breasts in the first part of the twentieth century with hearsay that prospective members of the Folies Bergere had to undergo a test where a coupe was placed over their naked breast. If the breast remained within the glass they passed and if their natural wonders overflowed, they were not selected.

In recent times Karl Lagerfeld designed a ceramic coupe in 2008 for Dom Perignon which was a modern version of the bowl from the dining service made especially for Marie Antoinette in 1787. The artwork was modelled on the breast of Claudia Schiffer.

Kate Moss did the same for a crystal coupe named ‘The 34 Kate Moss Coupe’ (34 being a London restaurant). It was designed by British artist Jane McAdam Freud, daughter of Lucian Freud, the British artist known for his work in portraiture (b1922 – d2011). Kate Moss’s signature is engraved on the coupe base.

Kate Moss at 40 was chosen by restaurant 34 to launch a coupe moulded to the shape of her left breast. Their website states this is to pay homage to her beauty, her femininity and her seminal status. In 2007 she designed clothes exclusively for the Topshop chain that were launched across 225 stores in the UK for a reported £3 million. In 2010 she designed handbags for Longchamp. In April 2014 she unveiled a second collection for Topshop and at ‘The 34 Moss Coupe’ launch the Topshop tycoon owner Sir Philip Green attended with Rita Ora. 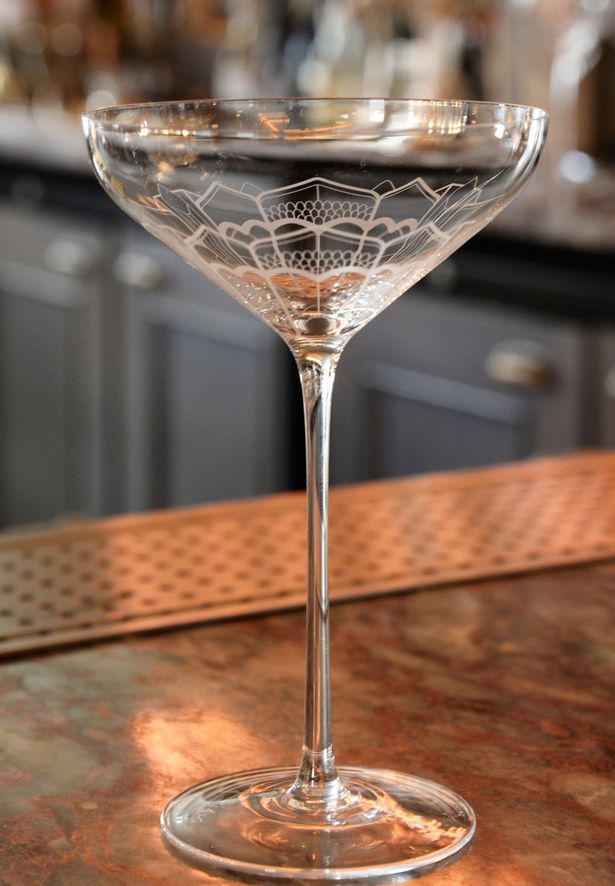 Launch Of The 34 Kate Moss Coupe at 34 Restaurant. Mayfair 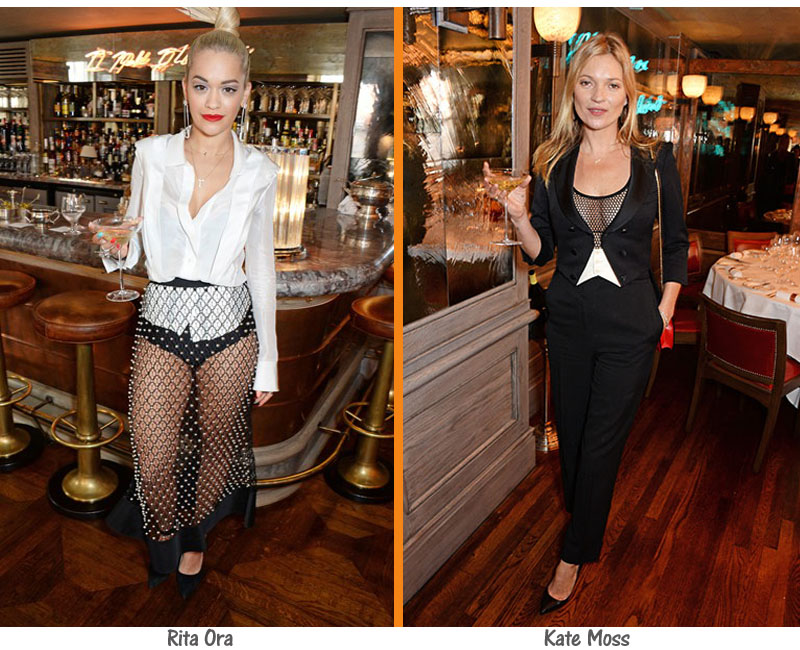 It’s true that champagne is not suited for the coupe glass because after a couple of minutes your bubbly has turned into still wine and just try walking across the room with a full glass, compare that to the flute. But for cocktails it is ideal. Similarly the martini glass may have visual appeal but its unfortunate conical smoothness means your drink will slosh about a bit and you will not even get half way across the room without losing it. The coupe therefore remains relevant; and would we really need to argue against the merits of a breast shaped glass for drinking purposes.

During the 1950s the coupe was re-thought and the mini coupe came about with emphasis on a much larger bulb at the base of the bowl. The coupe generally described as the breast of Marie Antoinette allows a generous bulb at the base because Marie Antoinette is said to have had nipples the size of berries. The mini coupe reduces bowl diameter and increases bulb depth in an attempt to be more functional and is used for margaritas and daiquiris.

Sometimes the mini coupe is referred to as a margarita glass. It is thought to have evolved at Sheldon McHenry’s ‘Tail O’ the Cock Restaurant’ on La Cienega Boulevard, Los Angeles. Depending on whether you accept the glass was thoughtfully designed for the purpose of cocktails or came into fruition because a bar owner ran out of glasses at the Tail O’ the Cock, weighs equally. But there would seem to be a connection between this story of the early 1950s and the margarita cocktail which was first mentioned in Esquire magazine in December 1953.

The drink’s origin is shadowy and certainly the ingredients were used in other cocktails during the 1930s. The original recipe called for an ounce (30ml) of tequila, a dash of triple sec and the juice of half a lime or lemon and is presumably the reason why it required a smaller version of the coupe of that time. 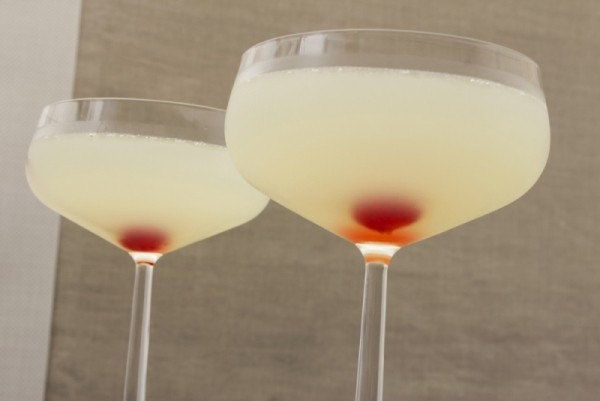 Didriks / Foter / CC BY
A simplistic design with no space at the stem point for a nipple which in no way gives justice to Marie Antoinette of whom was said carried nipples like berries.

The mini coupe used for margaritas and daiquiris emphasises the bulb at the base, shown below in this strawberry daiquiri. 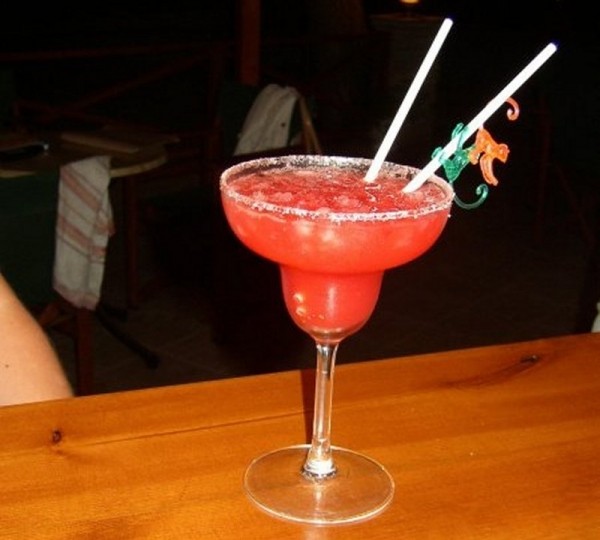 The margarita cocktail was not that popular through the 1950s, rather it was fitting in and developing its place in preparation for the sixties when it would take off alongside the martini. Margaritas were served in the coupe with sidecars, daiquiris, bacardis, grasshoppers and alexanders.

The margarita and daiquiri evolved into a slushy/frozen drink in some parts of California and then came the fruit flavours. In the 1960s things really came together, a home cocktail bar meant proper glassware, distinct cocktail recipes, funky umbrellas olives and ice, and a soda syphon.

← Prev: Selfridges The Best Store in The World Next: What are Minor Works → 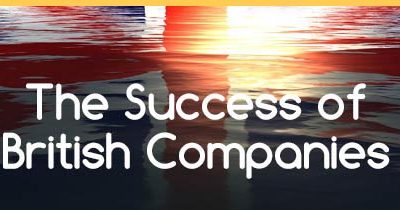 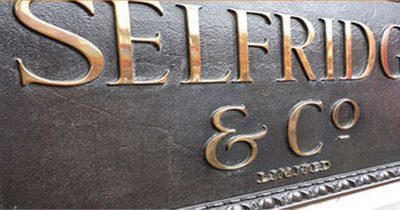 Selfridges, also known as Selfridges & Co, is a chain of high end department stores in the UK. Founded by Harry Gordon Selfridge the TV series about him and his stores has helped to publicise the ethos and driving force that continues to steer the brand today.