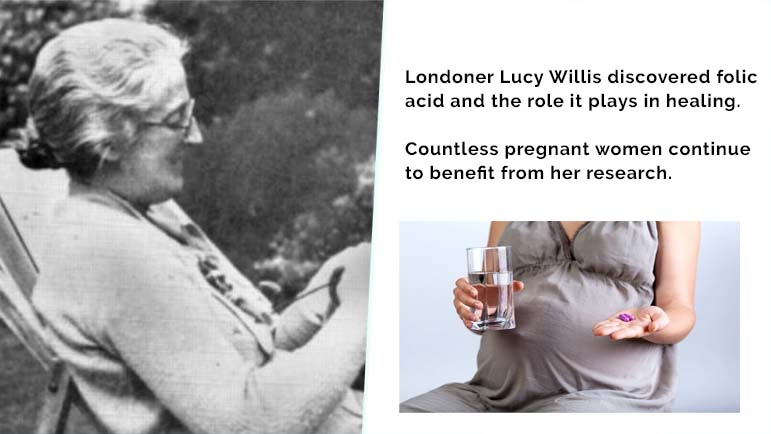 In the 1920s the Willis Factor was the added nutritional supplement that came from B vitamins, namely from liver. Lucy Wills made the connection between good health, especially during pregnancy, and nutrition. And she offered a cheaper alternative to poorer families with Marmite, the yeast extract vegetarian spread.

She was born in 1888 near Birmingham in England, and in 1911 became one of the first women in the country to get degrees in botany and geology from Cambridge University. In 1915 entered the London School of Medicine for Women and became a qualified medical practitioner in 1920.

After her medical degree her career took her to Mumbai to investigate why pregnant women were suffering from severe anaemia during pregnancy causing fatigue and diarrhoea sometimes with a fatal consequence.

She began by studying the women’s living conditions and with a select group studied their stool samples looking for bacteria. She found nothing in the stools suggesting a pathogenic cause and determined that deficiencies in vitamins might be the cause.

So she gave rats a diet of oatmeal and whole-wheat flour and supplemented some with whole milk which reduced the death rate, she therefore made an assumption that deficiency of certain vitamins was causing the anaemia in rats.

The breakthrough came with experiments on monkeys, those fed a diet based on the poor women in Mumbai grew poorly but monkeys given Marmite faired much better. Marmite had been part of a soldiers’ rations during World War I as it was thought to be rich in vitamins.

Lucy Wills hadn’t know what exactly in the Marmite had been the remedy. She had thought originally that the deficiency was of vitamins A and C but experimentation proved to not be the case. Whatever it was in the Marmite, it was not vitamins A or C.

Her results were published in the British Medical Journal 1931 in which she stated that she didn’t know what in Marmite was responsible. The secret ingredient became known as the Wills Factor.

Alongside Marmite she had also used liver supplement and the Wills Factor applied to this too. Liver was effective in Addisonian anaemia, caused by defective gastric secretions but much higher doses were needed in pregnant women, suggesting the two types of anaemia had different root causes.

Harriette Chick was a British microbiologist, protein scientist and nutritionist. During World War I it was a team led by her that performed nutritional studies to army rations in the search for a prevention of beriberi that concluded a good additions to rations would be yeast.

Lucy Wills learned from Harriette Chick at the Lister Institute that Marmite was rich in vitamin B. Having successfully treated anaemia in monkeys, she then treated 22 women with a similar effect.

The Asia-Pacific Journal wrote: “They experienced a quick return of appetite and an increase in the red cell count by the fourth day.”

Vitamin B complex is a group of compounds, of which only two had been identified at the time. On her return to England she identified the secret ingredient in Marmite and liver extract working with biochemist colleagues P.W. Clutterbuck and Barbara Evans.

It was described under several names until 1941 when Herschel Mitchell, Esmond Snell and Roger Williams isolated the compound from spinach and named it ‘folic acid’. Folic is a derivation of folium, the Latin for leaf. Folic acid is a form of folate, a B vitamin. They demonstrated the natural occurrence of folate in dark green leafy vegetables although it was also found in liver and various other biological sources as well as in citrus fruits.

Since the discovery of folic acid, it’s been found that it is one of the few nutritional supplements that work. In 1991 it was found that it not only helps pregnant women but extends to the developing foetus in greatly reduces the risk of neural tube defects that can result in spina bifida or anencephaly.

The neural tube is a key embryonic structure that when it doesn’t close properly can cause problems. With anencephaly the baby is born without parts of the brain and skull, and with spina bifida the spinal cord and backbone don’t develop properly. Babies with anencephaly usually die soon after birth, and spina bifida can lead to lifelong disabilities.

Most nutrition supplements don’t provide many benefits. However thanks to Lucy Wills modern women take folic acid for a healthier pregnancy. In the US and Canada, fortified flour containing folic acid was introduced in 1998, and the UK introduced folic acid fortification in 2018. Deaths from both the severe effects described have seen a dramatic fall.