Yes she really was a NASA computer, a trailblazer. With her recent passing she was honoured by NASA as one of its most inspirational figures. Always advocating racial equality, her 90th birthday fell on the US’s National Equality Day. She made considerable contributions to the organisation’s triumphs in spaceflight.

She was born in in West Virginia on 26 August 1918 and left school in 1937 with the highest honours from Virginia State College. Her skills at maths drew the attention of a young professor who told her that she’d make a good research mathematician, and as she recals, he said, “I’m going to see that you’re prepared.”

She was hired by NASA in 1953, by their Langley Memorial Aeronautical Laboratory in Hampton, Virginia, now known as the Langley Research Center. Within two weeks she was assigned to a project for the Flight Research Division which became her permanent position.

In 1960, she and engineer Ted Skopinski established the angle at burnout for Placing a Satellite over a selected earth position, which was in essence a series of equations describing an orbital spaceflight in which the landing position of the spacecraft is specified.

The paper she co-authored with Skopinski was the first for a women to receive credit as an author of a research report. She went on in to determine the trajectory analysis for Alan Shepard’s May 1961 mission Freedom 7, the first American human spaceflight.

In 1962 John Glenn’s Friendship 7 mission was a calculation nightmare and the astronauts were not entirely confident with the computational aspect being worked out by computers which required a worldwide communications network linking tracking stations to IBM computers across the US and Bermuda.

The orbital equations required were programmed into the computers. Glenn asked for Katherine Johnson to check the data, and he said, “If she says they’re good, then I’m ready to go.” She did check that the maths to control the trajectory of the capsule were indeed correct and Glenn’s mission was a success, placing the US ahead of the Soviet Union in the space race.

“The early trajectory was a parabola, and it was easy to predict where it would be at any point. When they said they wanted the capsule to come down at a certain place, they were trying to compute when it should start. I said, ‘Let me do it. You tell me when you want it and where you want it to land, and I’ll do it backwards and tell you when to take off.’ That was my forte.”

In 1969, in the Pocono Mountains, she watched with others around a television Neil Armstrong land on the moon. Katherine Johnson had done the calculations.

She retired in 1986. A book and movie titled ‘Hidden Figures’ have been made of her accomplishments. She passed away on 24 February 2020. 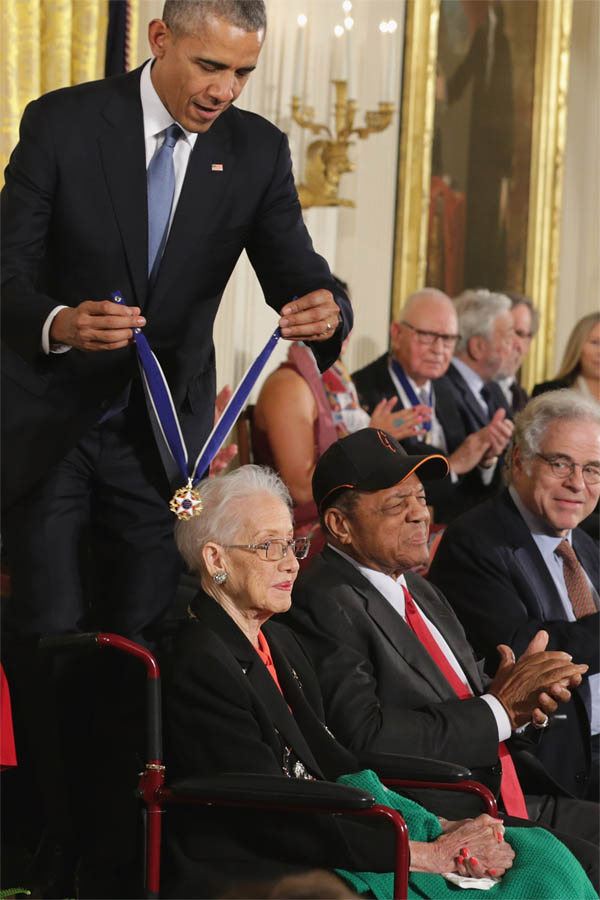