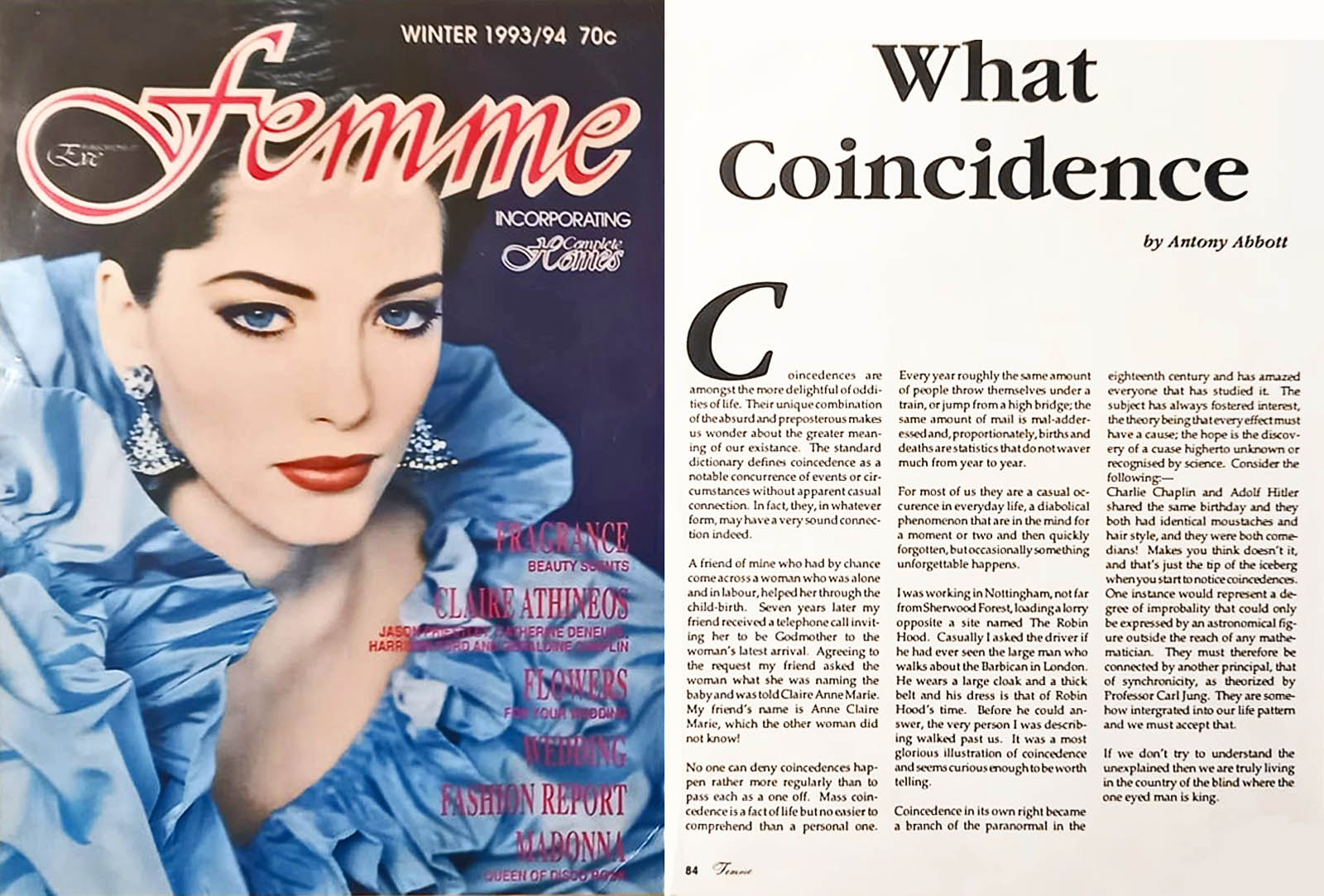 Coincidences are amongst the more delightful of oddities of life. Their unique combination of the absurd and preposterous makes us wonder about the greater meaning of our existence.

The standard dictionary defines coincidence as a notable concurrence of events or circumstances without apparent casual connection. In fact, they, in whatever form, may have a very sound connection indeed.

A friend of mine that had by chance come across a woman who was alone and in labour, helped her through the child-birth. Seven years later my friend received a telephone call inviting her to be Godmother to the woman’s latest arrival. Agreeing to the request my friend asked the woman what she was naming the baby and was told Claire Anne Marie. My friend’s name is Anne Claire Marie, which the other woman did not know!

No one can deny coincidences happen rather more regularly than to pass each as a one off. Mass coincidence is a fact of life but no easier to comprehend than a personal one.

Every year roughly the same amount of people throw themselves under a train, or jump from a high bridge; the same amount of mail is mal-addressed and, proportionately, births and deaths are statistics that do not waver much from year to year.

For most of us they are a casual occurrence in everyday life, a diabolical phenomenon that are in the mind for a moment or two and then quickly forgotten, but occasionally something unforgettable happens.

I was working in Nottingham, not far from Sherwood Forest, loading a lorry opposite a site named The Robin Hood. Casually I asked the driver if he had ever seen the large man who walks about the Barbican in London. He wears a large cloak and a thick belt and his dress is that of Roni Hood’s time.

Before he could answer, the very person I was describing walked past us. It was a most glorious illustration of coincidence and seems curious enough to be worth telling.

Coincidence in its own tight became a branch of the paranormal in the eighteenth century and has amazed everyone that has studied it. The subject has always fostered interest, the theory being that every effect must have a cause; the hope is the discovery of a cause hitherto unknown or recognised by science.

Charlie Chaplin and Adolf Hitler shared the same birthday and they both had identical moustaches and hair style. Makes you think doesn’t it and that’s just the tip of the iceberg when you start to notice coincidences.

One instance would represent a degree of improbability that could only be expressed by an astronomical figure outside the reach of any mathematician. They must therefore be connected by another principle, that of synchronicity, as theorised by Professor Carl Jung. They are somehow integrated into our life pattern and we must accept that.

If we don’t try to understand the unexplained then we are truly living in the country of the blind where the one eyed man is king. 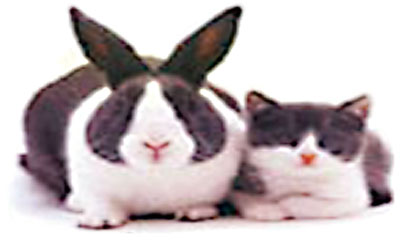 The strange links between Abraham Lincoln and John F. Kennedy.

The following observations do the conspiracy rounds and are usually presented as facts. It is always prudent to do research yourself to get to the bottom of things and formulate your own view based on your diligence and thoroughness.

So here is the Kennedy/Lincoln comparisons and uncanny coincidences which make for interesting reading whether partly or factual. My comments in orange.

Of course the obvious fact is that both men discussed here were American presidents that were assassinated, perhaps these are better described as things they have in common rather than over-stating that they are coincidences, which of course they are not.

Both were shot in the head and on a Friday, and by an assassin with three names; John Wilkes Booth and Lee Harvey Oswald. Both assassins were themselves assassinated before they made it to trial.

If so far these things are not in themselves coincidences, but similarities, it doesn’t end there but gets even stranger. After all this list is known as the Lincoln and Kennedy Coincidences.

Within a year of Kennedy’s assassination in August 1964, Time magazine called the list a “compendium of curious coincidences.” In 1999 the list was scrutinised by Snopes, a fact-checking website, and described the similarities as superficial and misleading.

As we said at the start, there’s a chasm between having things in common and coincidences, you should decide for yourself based on the diligence of your research.

The dates of office are indisputable but federal elections in the US happen only in even years, so there is some degree of explanation being that odd years are ruled out. However, the fact that congress and election years are exactly 100 years apart does mark them out as nice coincidences.

Of the sad misfortune of losing ones child, it should be noted that in Lincoln’s time child deaths were more likely and Lincoln’s child Willie Lincoln dies aged 11 presumed to be of typhoid a common disease of the time. The Lincoln’s had also lost a son before reaching office.

The Kennedy infant death was not down to disease of the times like Lincoln, but due to the problematic health of Jackie Kennedy. Her first pregnancy had resulted in a miscarriage, and a year later in 1956 she produced a stillborn baby by Ceasarean section.

Two healthy children followed, but the fifth came three weeks early when she was horse riding and felt pains in her back and stomach. Baby Patrick was unable to establish a normalized breathing pattern and died after 39 hours.

John F. Kennedy was assassinated fifteen weeks after the death of his son.