Registration plate sells for a record £500,000 in Wales

The owner of Berkshire-based Ferrari dealer Talacrest, paid £518,000 for the plate 25 O.

Do the BBC have a special department for filler items, perhaps they might address the annoying habit of publishing fillers that provide more questions than answers. It’s a trend that applies equally to the Evening Standard.

Time and time again a filler leaves you frustrated because a snippet of news has made it through the system and it would seem, without any valid proofreading at all.

A personal registration plate was sold at auction for £518,000, setting a new British record. Registration “25 O” was sold by the DVLA during an event at The Vale Resort in the Vale of Glamorgan.

John Collins, owner of Talacrest, bought the plate just three hours after paying £130,320 for the number “250 L”. Mr Collins said: “I was determined to own them, it was a case of how much I was going to pay for the privilege.”

The DVLA has raised more than £2bn for the Treasury in 25 years of selling personalised registration plates.

Thanks for that news, but the real meat on that article should be the reason this guy spent so much money for those plates because ’25 O’ and ‘250 L’ mean absolutely nothing to me. It obviously means something to the buyer, but what? What was the point of this news snippet if not to elaborate on the ‘why’?

The Evening Standard are far worse, they do it all the time.

Up until the EU referendum in 2016, most people thought the BBC was a British institution akin to the NHS, and much respected. Especially the elder generation, that held a greater esteem for it because when they were kids there were only five channels, two of them broadcast by the BBC until ITN, CH4 and C5 appeared.

That generation grew up with Dr Who, saw the world with Alan Whicker, got to know the animals at Bristol Zoo with Johnny Morris, and even had a chance to be famous on Opportunity Knocks with Hughie Green and the Saturday was The Generation Game with Bruce Forsyth.

That’s a big hook when the population consider you an institution, when they believe something to be quintessentially British and a part of who they are. The BBC has held its ground since being the only broadcaster to competing today with over a hundred others. Box sets like Dr Who and David Attenborough series are sold to every part of the world.

And let’s not forget they haven’t lost sight of radio broadcasting which reaches all corners of the globe and is respected as the foremost and definitive standard for news reporting. Take the famous BBC World Service for example, everyone expect the truth from the BBC.

Whilst the quality of programmes and content are second to none, the news has lost credibility. It’s particularly shocking that  it allowed this to happen. The BBC per se is seen as a mirror of the British way of life, a nation tolerant and accepting of all citizens and immigrants, a caring society based on fairness and law.

From the moment it was announced that a majority vote wanted to leave the EU, the BBC became biased in favour of the Remain campaign. This was the beginning of it’s undoing when it favoured a Remain Government and Parliament turning against the will of the people.

The BBC argues that it was caught between a rock and a hard place in-between a polarised nation, with an almost 50/50 split on the vote. But that is nonsense, it wasn’t caught in the middle at all but blatantly took a side. 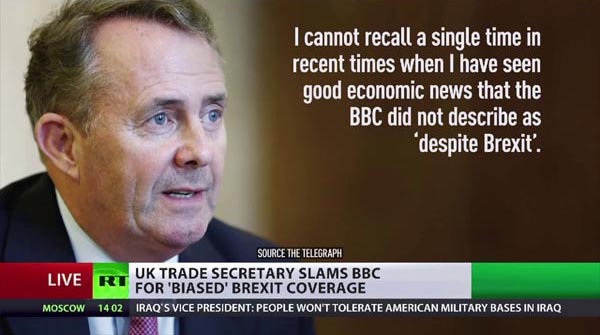 in  its capacity as a news reporter the BBC should be impartial but instead it gave a ridiculous amount of airtime to favour Remain over Leave, so much so that for half of the population ‘BBC’ came to represent the Brussels Broadcasting Corporation.

And so it is when a husband walks in on his wife in bed with the gardener, the image does not go away and things can never be the same. So too for a great many people can the BBC never be trusted again. It’s the sort of betrayal that will not be forgiven for a generation; generally considered to be thirty years.

Audience surveys carried out on behalf of the BBC showed a negative reaction to its coverage of Brexit. And a review of BBC news and current affairs by the regulator Ofcom in October 2019 stated a dissatisfaction with the BBC’s coverage of Brexit. By throwing away its integrity, it has aligned itself with other politically controlled state broadcasters like Russian TV (RT) and Chinese TV (CGTN).

So which way forward for the BBC, already there are calls to withdraw TV licensing and make it a subscription service, some would like to scrap it altogether. Why would anyone seriously want to pay to watch it; I can only think of one reason – they still make Dr Who.

Update October 2020: How can so much media by one broadcaster be broadcast so much over so much distance and yet there is nothing I would find enjoyable, interesting or informative to watch. I have cancelled all services including the TV Licence fee and iPlayer.

← Prev: Are food banks the fourth emergency service? Next: What are saveloy skins made of? → 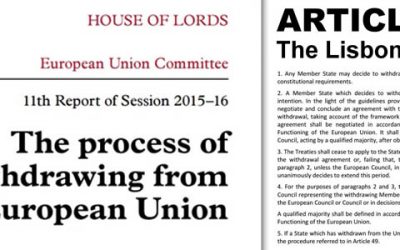 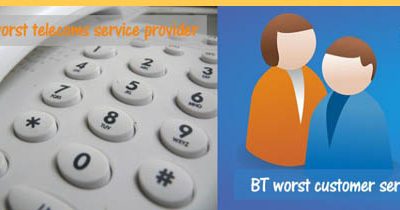 BT inherited the telecoms monopoly from the Post Office. You would think that by now they’d understand the commercial benefits of an efficient customer journey and good customer service – think again!

BT inherited the telecoms monopoly from the Post Office. You would think that by now they’d understand the commercial benefits of an efficient customer journey and good customer service – think again!