Mayonnaise-like mixtures of olive/vegetable oil and egg were made in ancient Egypt and Roman times, but the refinement with added lemon juice plus seasoning was developed by a French chef much later on in culinary history.

The French, led by Louis-François-Armand de Vignerot du Plessis expelled the English from the Balearic island of Menorca in 1756. Following the capture of the capital Mahón, a celebratory banquet took place.

The chef was Marie Antoine Carême who was an exceptionally precise chef and is considered today to be the founding father of French Cuisine. On this occasion however, the story goes that he found himself short on cream when needing to make a sauce. Classically, sauces were made by mixing eggs with cream. So he substituted olive oil for cream and blended the egg yolks and olive oil to an emulsion and quite by chance, he had invented a mayonnaise.

He named the new sauce Mahónnaise in honour of Mahón and took it back to France. There are several stories on how the ‘naise’ on the end came about. Some discard that Carême had anything to do with it altogether, instead suggesting that a Catalan condiment called Salsa Mahonesa was taken by the Spanish to Menorca when they took the island from the English.

Nobody can love food more than the French but one theory purports that during the Seven Year War, the French took the opportunity to invade Menorca to claim salsa mahonesa for themselves but it seems a bit far fetched even for the French.

An old French word for the yolk of an egg is ‘moyeu’. This theory states that the word mayonnaise is a derivative of moyeunaise. If it is accepted that Carême brought Mahónnaise to France in 1756 then he may well have considered naming the condiment moyeunaise or perhaps he saw that Mahónnaise was a quirky play on moyeunaise due to the town he had just come from. 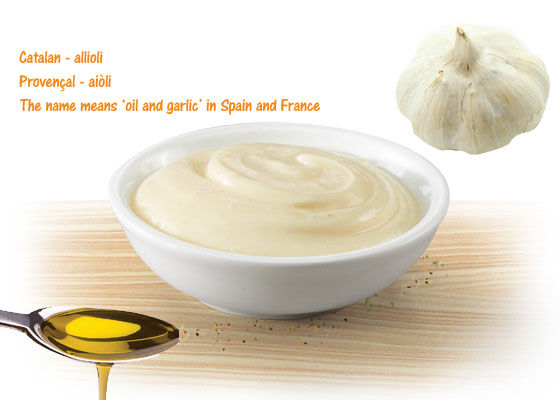 Either way, the story of who named it or where the name came from seems to be irrelevant. Was mayonnaise invented by Carême or was salsa mahonesa already invented in Spain that is the big question. There is no doubt that France popularised mayonnaise around the world but the subject doesn’t rest here.

Because there is a gap of fifty years between the battle of Mahón and the appearance of mayonnaise in textual records, the possible origins are still up for debate. Some Spanish are calling to bannish the word mayonnaise in favour of only using salsa mahonesa. There is even claim that mayonnaise is mentioned in an English text dating to the sixteenth century.

To add more drama to an already very contentious discussion, there is a town in the South of France almost at the Spanish border, called Bayonne. The theory around 1800 was that Bayonnaise was the name of the condiment but various French accents roughly turned the B to an M.

The oil and egg mixtures from ancient Egypt and Rome had to travel westward at some point and so it is likely this arrived in Spain with the Moors in the form of an oil, garlic and salt emulsion called allioli, in Catalan. It’s possible this travelled northwards to France and maybe Bayonne itself, where Carême had already introduced his Mahónnaise. The French decided either to add egg yolk or to add garlic to their Mahónnaise. and called it aïoli. This is my theory.

Gaius Plinius Secundus, better known in historical texts as Pliny the Elder, published Naturalis Historia around AD 77–79, acknowledged as one of the largest single works to have survived from the Roman Empire. As well as a writer Pliny was a Roman Commander. During his spell as the Roman procurator in Tarragona, a prime city of Catalunia, he wrote about garlic for the Naturalis Historia.

Aïoli is a Roman sauce which they knew by the name of “aleatum”. The ancient condiment arrived in Spain either by the Romans or the Moors or it arrived in France by returning Crusaders. It would seem plausible that Carême when caught without cream in Mahón knew of aïoli and instead of garlic he used egg, and voila! When he returned to France his message was probably “try making that with some egg yolks instead of garlic.

So it’s unlikely that the invention of mayonnaise is attributable solely to Marie Antoine Carême. The answer lies in the history of sauces. Civilisations all over were blending oils with garlic, salt, eggs, whatever. At some point ideas crossed borders and at another point civilisations advanced in their cuisine classified these and refined the recipes. 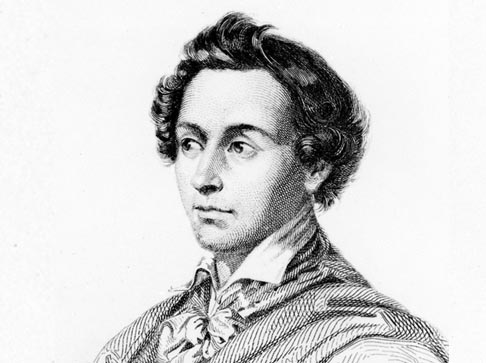 Marie-Antoine Carême was an early exponent of the grande cuisine style of cooking. His ideas were new and his rules uncomplicated, such as the forbidding of meat and fish on the same plate. In his book ‘L’Art de la Cuisine Français’, he refined the art of garnish.

In these respects he brought the French styles together that had developed through the Middle Ages and forged La Grande Cuisine Française, from which nouvelle and haute cuisines derived from. For the next 200 years the French cuisine was supreme across Europe.

He was a food writer too and was able to communicate his ideas far and wide. For example he regarded Roman cuisine as barbaric and so he single-handedly moved French cuisine apart from anything that had been known before.

He made edible sculptures for the table, classified French sauces into four categories, promoted cold meats and buffet food, wrote books on the history of French cookery and made rules on how to work in the kitchen, for example the white chef jackets and tall hats still worn today were introduced by him.

Carême worked for royalty in England then Russia, Vienna and Paris. On his death in 1833 a plaster cast was made of his head and he was subsequently buried at the Cimetière de Montmartre.

François Pierre de la Varenne was the author of Le Cuisinier françois (1651), the founding text of modern French cuisine. Until now French food was of Italian influence, la Varenne created a French identity aside from the practices followed during the Middle Ages and Renaissance periods.

The work allowed leading chefs to put down what was classically French and so the work was written by and intended for professionals.

The history of modern French sauces began during this period, during the reign of Louis XIV. Mayonnaise is one of the five mother sauces (sauces mères) which also include sauce espagnole, tomato sauce, béchamel, velouté and hollandaise.

1. Melt the butter in a small pan until it is bubbling and turning slightly brown.

2. Take off the heat and whisk in the vinegar, salt and nutmeg.

3. Meanwhile whisk the egg yolks in a bowl and still whisking vigorously add the butter and vinegar mixture a few drops at a time.

If all goes well the mixture should emulsify and yield an even creamy, yellow, sauce. This is not an easy sauce for the beginner to make and you can cheat by placing the egg yolks, vinegar and spices in a blender. Blitz together then add the molten butter a little at a time, using the blender to merge with the egg yolks. This yields a perfect sauce that will not split for several hours.

A round 1900 another great French chef Georges Auguste Escoffier simplified and refined Carême’s philosophy even further. Sometimes called the king of chefs, he modernised haute cuisine which became known as cuisine classique. 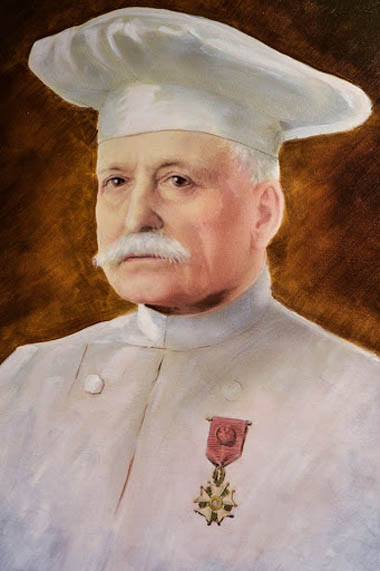 His ideas were noticeable departures from previous methods but soon became standards for the world of haute cuisine.

Up to now the restaurant served all parts of a meal at the same time placing strain on the kitchen and the guests. Escoffier separated the menu into courses allowing kitchen staff to work in teams and to be overseen by a Head Chef. He simplified food service by advocating the use of seasonal ingredients and the abandonment of elaborate garnishes.

His career spanned from the age of twelve to age seventy-four. He was the first chef to be appointed to the newly built Savoy hotel in Picadilli and he created the famous péche Melba in honour of the famous singer Nellie Melba when she was staying there in 1893.

W ritings on the history of mayonnaise refer to Mahón as a place of no culinary significance, however wild garlic grows freely and may have flavoured many a Roman dish. The environmental conditions are such that cows and sheep produce milk with a uniquely high acidity and saltiness.

The taste is very particular, slightly acidic and salty, but not buttery. It can be milky and humid when fresh, and dry, strong and piquant as the ageing grows. 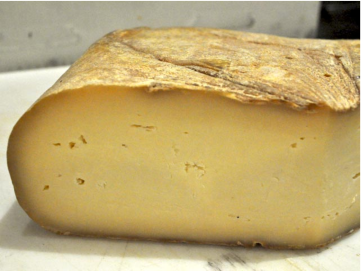 Mahón being a port as well as the capital, has always conducted all external trade. It’s not difficult to imagine a prosperous trading enterprise similar to Crete, also a strategic island in the Mediterranean.

The agriculture and dairy farming are documented in texts dating from the thirteenth century. The Moors and the Romans both settled here.

There are many varieties of cheese on the island and queso de Mahón (cheese of Mahón) is the name given to all cow’s milk cheeses exported from Menorca.

In Menorca dairy production is only second to tourism with over 600 farms across an island barely 800 square kilometres in size. 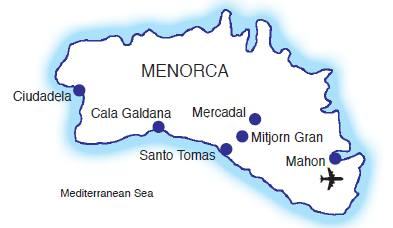 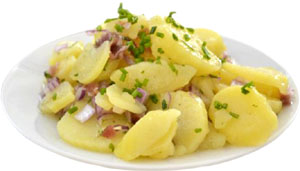 Kartoffelsalat, a Russian salad, basically vegetables mixed in mayonnaise topped with boiled eggs. A salad of cooked eggs served with a sauce of raw eggs.