The first passenger carrying underground railway in the world was steam operated and was opened by a private company called the Metropolitan Railway in 1863 and it carried 26,000 passengers a day between Paddington and Farringdon Street. Indeed the underground was funded entirely by private companies up until the 1930s.

It took 21 years from 1863 to 1884 to complete the Inner Circle of tube lines in central London by which time there were over 800 trains running every day. But it was not until 1896 that the next complete underground railway opened in the UK outside of London, the Glasgow District Subway. 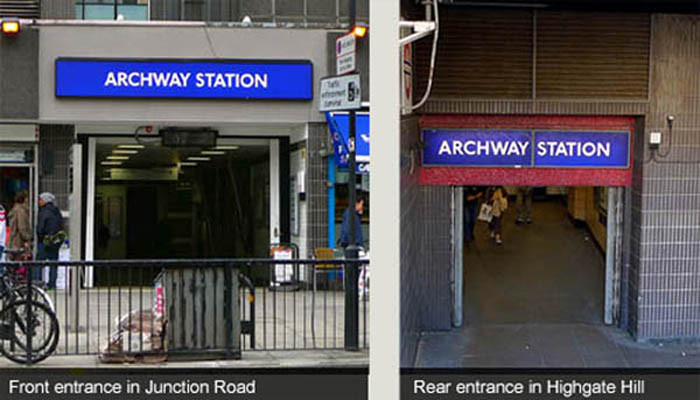 It would take until 1907 for the Charing Cross, Euston and Hampstead Railway (CCE&HR) to commence services from Charing Cross to Golders Green and Highgate which was known as the Hampstead Tube. In present day Archway, a station was opened on 22 June but it was named ‘Highgate’ and not Archway, nor Archway Tavern as had also been proposed.

The station’s name changed several times over its history, undecided whether the place was in the south of Highgate or a place where Archway Bridge stood. In 1907 when it opened, the area had no specific name and it was in naming the station that a de facto name for the place emerged. Perhaps in the hope of attracting patronage it opened as ‘Highgate’ because that was the nearest affluent area. Historically it could have just as equally been named Upper Holloway. It became the center of a place and Archway today is generally considered to be an area within half a mile around the station. Its various names have been as follows:

1907 was a busy year in the history of the Underground with a huge amount of construction going on. For instance in the south men were working on a spiral escalator at Holloway Road station but it was left unfinished and forgotten about until it was discovered many years later. Angel station opened in 1907. And in the north Hampstead tube opened. And many other stations opened in this year. Even buses changed, before 1907 different routes had different colours, they have not always been red. 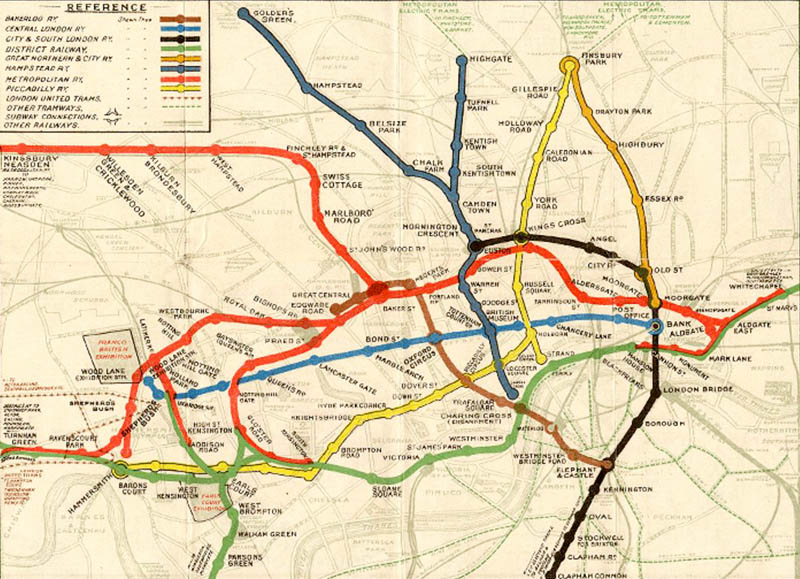 All the station exteriors were photographed in order to look at ways of designing a uniform exterior which led to the appearance in 1908 of the red circle logo and passengers were provided with the first free Underground map. Between 1907 and 1908 the Hampstead Tube carried 25 million passengers.

The main entrance has always been in Junction Road with the second entrance opening in 1929. When the station opened it was one of two terminuses from Charing Cross, the other being Golders Green. The line underwent continual development particularly after London Transport inherited it in 1933 and from then on started forming it in to what we recognise today as the Northern Line. When it was extended to Finchley, Archway (Highgate) station kept the terminus tracks which can be still be used for trains that terminate at Archway.

When we learn about the history of London Underground the name Charles Holden springs up but he was one of several people that contributed. Specific to the Northern Line, three of these people were American financier Charles Tyson Yerkes from Chicago, Leslie William Green a London architect, and Charles Holden an architect from Bolton. 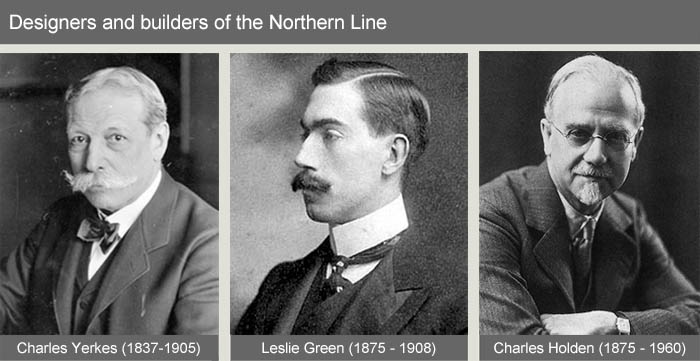 Yerkes and Green both died within a few years of the opening of Highgate, (1905 and 1908 respectively). Yerkes was a financier with a love for art, which he avidly collected. He arrived in England in 1900 to seize a financial opportunity as advised to him by his friend Sir Robert Perks. Over the next five years he would travel regularly between Chicago and London in an endeavour that would help to ruin him financially.

In 1901, following the folding of London & Globe, financiers of the Baker Street & Waterloo Railway, Yerkes formed the company Underground Electric Railways of London Ltd (UERL) with American financial investment (particularly from the Speyer banking family,) to acquire what are today called the District, Piccadilly and Northern (Hampstead Tube) lines.

That’s an over simplified description as the Piccadilly Line was not yet built, but Yerkes began massive building immediately, including the Charing Cross, Euston and Hampstead Railway (CCEHR) – the beginning of the Northern Line. In 1903 he added the Bakerloo Line to the company’s portfolio. Basically within three years he had acquired a considerable amount of London’s existing network and his three new lines all opened between March 1906 and June 1907, all unfortunately after his death.

In 1902 Yerkes extension proposal from Golders Green to Highgate was approved by parliament and in September of 1903 Leslie Green, who had a history of credible work but no large scale projects under his belt, was appointed by the Yerkes syndicate to design the station buildings above ground. His task, in modern language, was to create a lasting brand for the Underground. 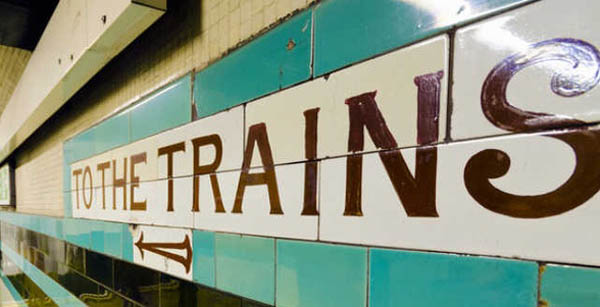 Green’s stations were erected with a structural steel frame, two-storeys high with a flat roof, to allow for future commercial office development above if required although most have remained unbuilt upon. The steel load-bearing structure provided maximum interior space, featured large semi-circular windows at first floor level and the exterior was clad in ox-blood red glazed terracotta blocks made by the Leeds Fireclay Company. A broad strip between the two floors displayed the name of the station in capital letters. Some of the surviving stations are Grade II listed buildings including Holloway Road and Caledonian Road.

Both Yerkes’ love of art and Greens’ eye for functional beauty gave us the wonderful buildings we see today. There is still something pleasant about walking in to one of these buildings. That being said, according to one account I have seen when Highgate opened it had a green tiled frontage but I have yet to see evidence of this. Another account states it was red clad like Green’s other stations, but this has something to do with a temporary station connected to Tufnell Park I am led to believe.

Green was only contracted to design the building itself above ground level but he got involved as had Yerkes, with the interior; its foyer, corridors, stairways and platforms and most interestingly the tile art that plastered its walls. 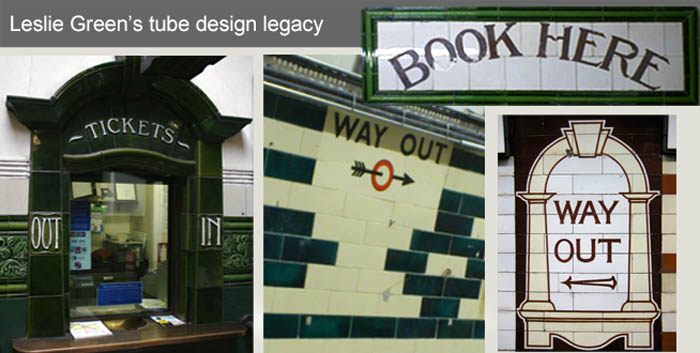 Green was only 33 years old when he died, but his work over four years had contributed to over fifty stations spread across the three tube lines. In his application for Fellowship of the Royal Institute of British Architects (RIBA) in 1907, he was proud to exclaim:

“Early in 1903 I was appointed Architect to the Underground Electric Railway Company of London Limited, which was formed for the construction of the Baker Street & Waterloo, the Great Northern Piccadilly & Brompton, and the Charing Cross, Euston & Hampstead Tube Railways. Since that time I have designed and completed the erection of more than 50 Tube Station Buildings, besides designing and carrying out the decorative works to station tunnels, platforms and passages….”

By the time of the first world war the UERL controlled all but one of the tube lines. It was against the rules to use the Underground as a bomb shelter preferring to keep it in use for transportation but after protests the government allowed stations to be used as shelters and provided beds and food services. The main bombing campaign by Germany was directed at England using airships from January 1915 and known as Zeppelin raids. Police reports of German bomb raids on London in 1917 estimated that 300,000 people were taking shelter in Tube stations.

Charles Holden in comparison to Green also saw the beauty in simple functional design. If one thinks of war time German design as simple and functional then Holden had aligned himself with that model to a point were he may be described as modernist or minimalist. In fact in 1930 Holden made a tour of Germany and Scandinavia to survey the modern architecture.

His first commission for the Underground was for the design of the entrance to Westminster Station in 1924 which was demolished in 1999 when the station was rebuilt. He designed about 20 stations and is most famed for designing the new London Underground headquarters at 55 Broadway in 1929 as well as the Piccadilly extensions.

The first escalators were installed at Earl’s Court in 1911 but Highgate had to wait until major refurbishment work took place in 1930 for the lifts to be replaced with escalators. Holden built a marvellous front in Portland Stone and glass and replaced the secondary entrance to Highgate Hill. The works finished in 1931 and he went on to redesign the entrances for East Finchley and Finchley Central. 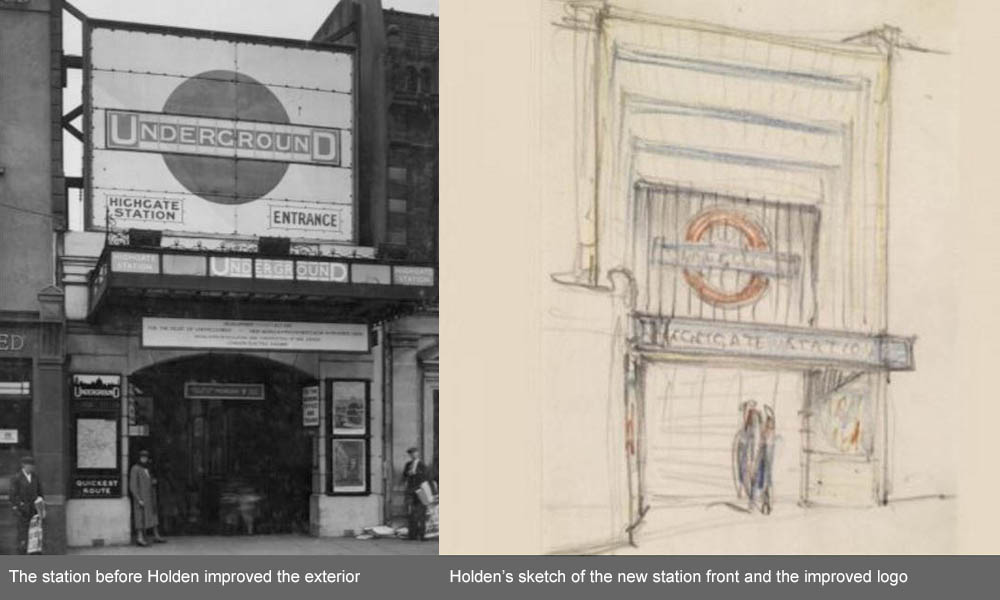 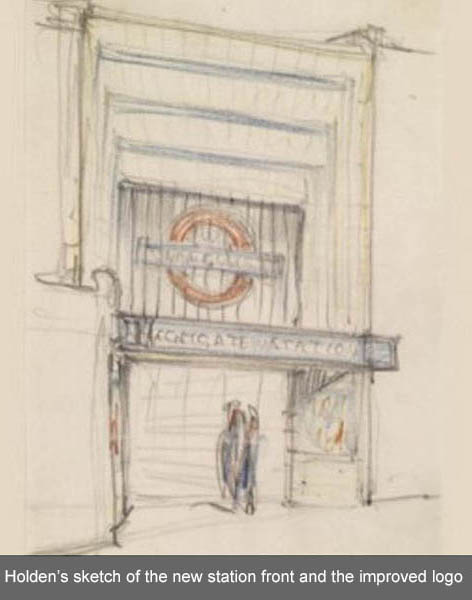 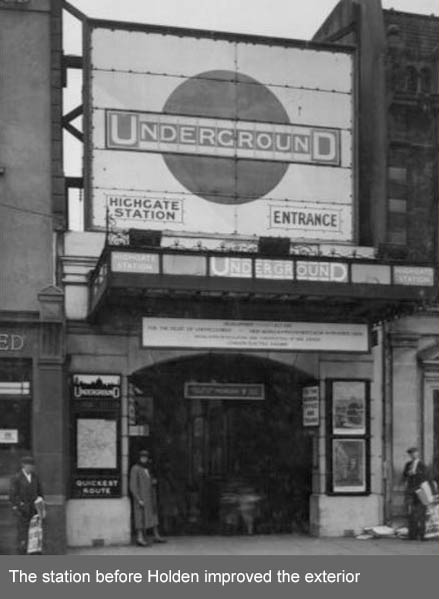 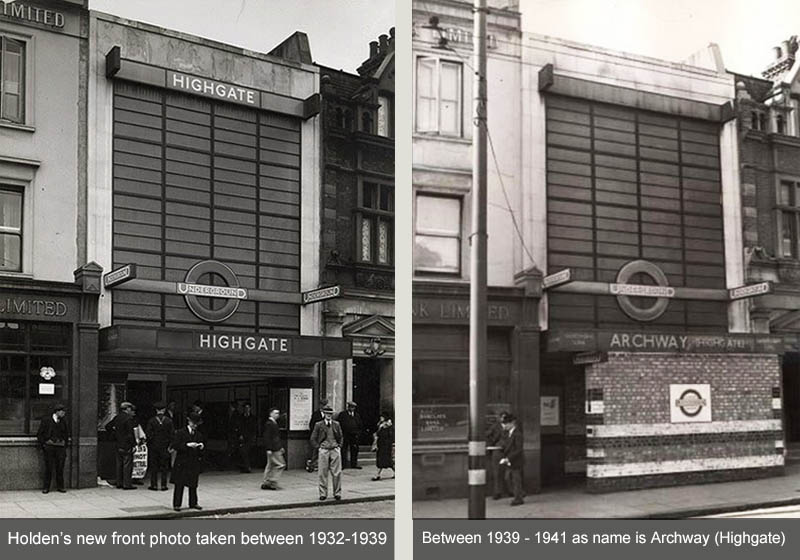 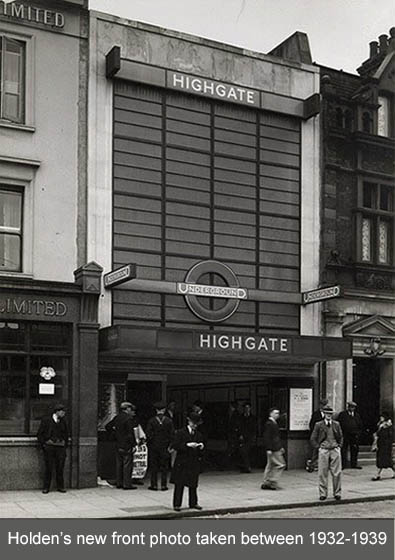 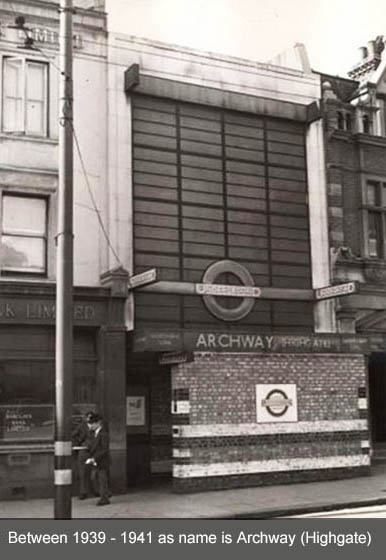 When the line pushed towards Hampstead it met with local opposition as it was claimed that the tube would drain the Heath of moisture, but there would be no stopping the tube as there had been no stopping the railways that came before that. The Underground went into public control in 1933 and previous plans to extend the line from Highgate were reinstated. London Transport became responsible for an area of 2,000 square miles within a 20 to 30 mile radius of Charing Cross, carrying 415 million passengers each year.

By 1926 the line had pushed south to Morden station making it the most southern station and in 1933 the line had pushed past Hampstead on the Golders Green branch and now terminated at Edgware, as it does today. But on the other northern branch the terminus was still Highgate until 1939 when the Great Northern Railway extended the Northern Line to East Finchley. The stretch from East Finchley to Morden became the longest continuous tunnel (via Bank) being some 27.8km/17.25 miles long.

Today the underground network reaches as far as Chesam, that’s 40km north-west of Charing Cross. There are 270 stations of which less than 10 per cent are south of the Thames and only 45 per cent of the Underground is actually in tunnels. In the 1970s, having been named just ‘Archway’ for thirty years, the station underwent its next major renovations at which time most of the Leslie Green and Charles Holden evidence was removed forever when both platforms were fully re-tiled and the building exterior changed to resemble the entrance of a Nazi bunker.