To anyone unfamiliar with the history of Archway, a description of this place would be a list of the many points of interest, such as the Archway Tavern, Whittington Hospital, the Whittington cat monument, and Archway Bridge. These defining landmarks are explained in more detail elsewhere, here we look at some of the lesser known establishments and landmarks of days long past. 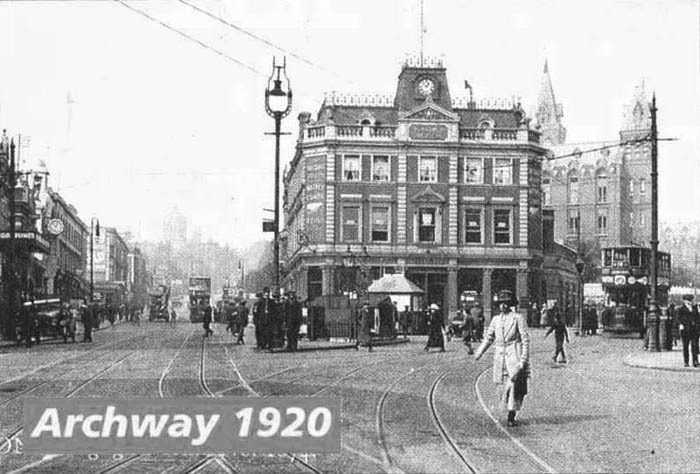 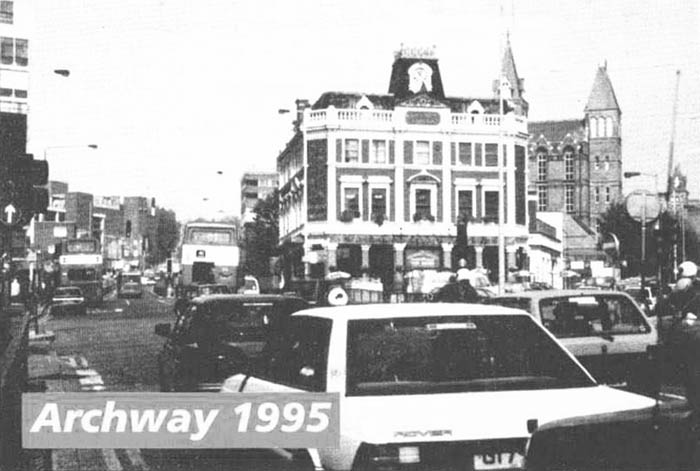 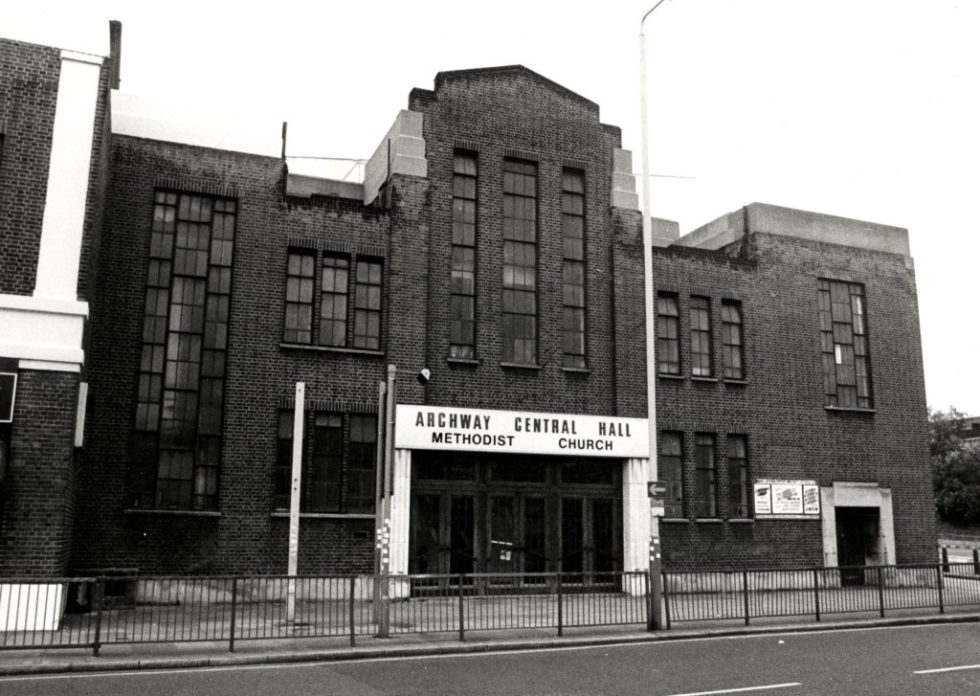 When we talk about the Methodist Hall, it’s used interchangeably with Methodist Church and this is because the Church sits on the corner of the central Archway area and the Hall takes a more prominent position in the central area, but both were built as one complex and owned and maintained by the same owners thereafter for over half a century.

They are entirely neglected in academic literature as well as having no graded architectural status due to the carefree method of its construction. Although the Archway Central Hall is one of the few remaining examples of these halls built throughout the country in the early twentieth century, it always was and remains a place of significance with regards to its prominent location and involvement with the local community, rather than for architectural importance.

The headquarters of the Methodist Church in Great Britain is Westminster Central Hall, situated across from Westminster Abbey. It was built in 1912 as part of a programme from 1886 to 1945 that erected great halls throughout Britain. Westminster was not the first Central Hall, the first ones appeared in Manchester (1886), Bermondsey (1898), Liverpool (1905), and Sheffield (1908).

More than thirty Central Halls were built throughout London, equating to a third that were built in Greater London. They were not solely for worship but for general use and secular events alike; for meetings, theatre, cinema, or dancing etc. Westminster Central Hall in 1946 held the founding sessions that created the United Nations General Assembly.

The denomination of Methodism sits within the Church of England. It was the result of a movement led my an English evangelist called John Wesley. Perhaps the most notable aim of the movement was a main focus in addressing the poverty of areas. John Wesley said “I look upon the whole world as my parish.”

John Wesley put roots in Archway with the Wesleyan Chapel built in 1864. By 1930 it was the Archway Road Chapel and had deteriorated to a point were it was decided to build a Central Hall. The Wesleyans, the Primitives and the United Methodists, joined together to form one church and in 1934 the present buildings were erected as the Archway Central Hall. The Reverend Charles Hulbert was appointed to oversee the building works.

Central Halls are distinct in their lack of elaborate design. They were not built in Georgian or art deco fashion but instead were to sit alongside existing buildings, to compete with pubs, dance halls and cinemas but with a grander central space.

The large hall was in the specifications which stated that at least 1,000 people could worship at once. There was also a requirement to self maintain the building. Therefore so many are found in prominent locations offering ground floor shop units, the renting of the main hall for cinema or dancing, and with smaller halls for hire. This was a method used in historic times where temples would also provide non-religious functionality such as a market place.

An architectural competition was held and the company George E. and K. G. Withers of London, won the commission for the design of the Archway Central Hall. When Charles Hulbert enquired about the design style he learned of the frugality of building restrictions, Withers replied that: ‘there is no particular style of architecture, we have adopted the modern style which is in keeping with present day costs and steel constructed buildings’.

The first planning application was refused because of the anticipated road widening projects and so the building line had to be set back by fourteen feet on Archway Road and six feet on St Johns Way, after which planning approval was granted in November 1932, and Archway Central Hall opened in April 1934. The new hall made immediate impact with a floodlit stone cross that dominated the building. When the tower was truncated in 1956 the cross was removed and replaced with a neon equivalent.

The church entrance off St John’s Way boasted a full sized cinema screen that could be winched up and down as required. Traffic noise was addressed by insulating the walls with a high density fibrous board. A snippet in a Methodist Church magazine said: ‘At first before our people had got really used to it, all sorts of amusing ideas existed as to what it really was. It is on record that several people from time to time passed the swing door with their towel around their necks, asking which way to the swimming bath.‘

Saturday afternoons were given over to a children’s cinema showing a mixture of cartoons and educational films and there were concerts and variety acts and whatever films they could get hold of from the Rank corporation. This was the heyday of the Methodist Mission in Archway.

During the Second World War the basement was requisitioned by Islington Borough Council as an air raid shelter. Hundreds of people used it and the Methodists provided entertainment and provisions. In 1946 the cine-projectors were sold and the hall turned to facilities for teenagers – the Methodist Association of Youth Clubs (MAYC), an organisation that in the 50’s had some 3,400 clubs.

Archway Methodist Hall provided six rooms up to four times a week for these creative classes. However, this phase petered out in the 60’s. As early as 1939 the congregation began to wane and with commercial success came complaints that it was no longer prominent as a church. So by the 1950s the sign on the outside was separated to display above both entrances ‘Archway Central Hall’ and ‘Archway Methodist Church’.

When the Greater London Council (GLC) eventually superseded the LCC in 1965, Archway Road was widened to a dual carriageway and the intersection became a gyratory roundabout, isolating the Archway Tavern and Methodist Hall and Church within a traffic island. It was the single most damaging development in Archway’s history as it curtailed social development and relegated the area to ‘that place where the roundabout is’.

A Methodist report of 1974 stated: ‘Archway is still suffering grievously from people moving away and there is still widespread dereliction in the area.‘ During this time only 10% of the church on Sunday was filled by worshippers. Years later in 2007 an architect Sir Terry Farrell commented on the disrupting effect that gyratory road schemes had in London, amongst them Archway of which he described as a lost town.

On the south side in Upper Holloway, the mews next to what was for many years the family ran business Thomas Brothers, can be still seen tram tracks at the old entrance to the tram depot. The whole area contained the trams and over the minimum twelve stables required to operate services for twelve hours around the clock.

The site functioned as a job centre for some years and before that it was used by Crosfield electronic and printing works. Even earlier it had belonged to the Integral Propeller Co. before they moved to Hendon in 1914 and before them it was used as a tramway depot, as demonstrated with this image outlining the layout.

A hundred yards up in Flowers Mews, that was the main coach house to provide stables and coach house accommodation for the main houses on the surrounding streets and travellers. 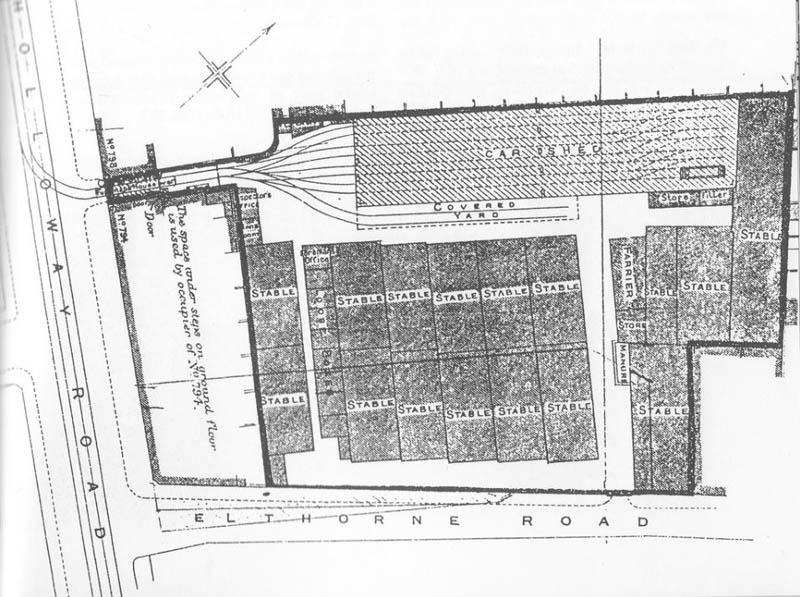 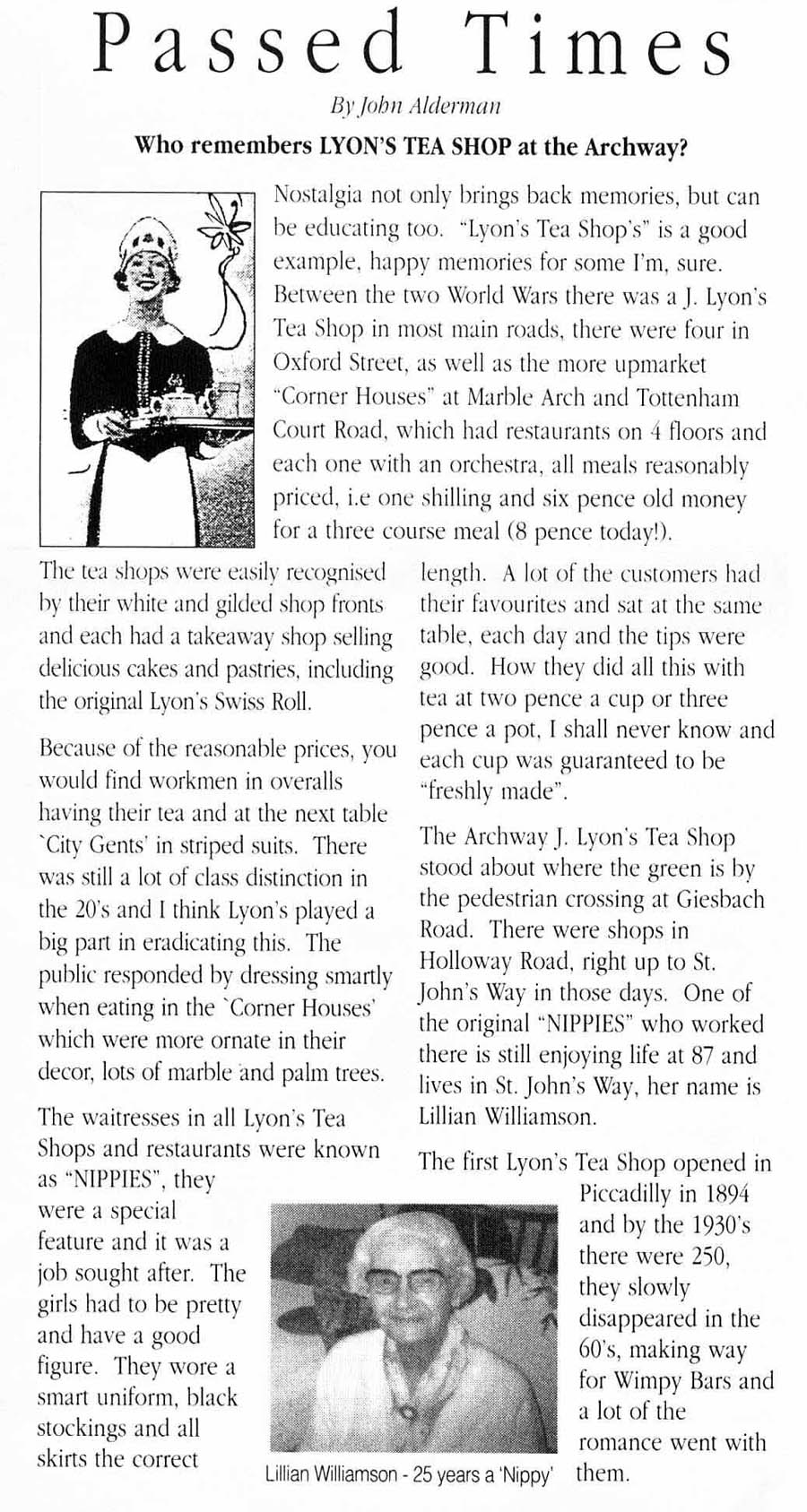