There had been attempts to improve Highgate hill and make it less difficult and dangerous but these had failed. The second half of the 18th Century appears to have on record the most dangerous due to the weight of traffic. A record was kept in the Assembly Hall book at Highgate of notable events, here are two entries:

1770 – Lord Sandys was upset in his coach coming down Highgate Hill, from the effects of which accident he died 21st April.

1804 – On Sunday evening two young men riding for a wager down Highgate Hill, one of the horses stumbled, and the rider broke his neck.

Highgate Hill had been unsuited to heavy traffic for a long time and the proposal that received approval was for a tunnel under the hill along the line of the existing Archway Road to join the Great North Road. In 1808/1809, engineer Robert Vazie had proposed an arched tunnel. Scottish civil engineer John Rennie was consulted in 1811 and he expressed concerns in building a brick tunnel and instead suggested a bridge.

The Highgate by-pass was not desirable for a hamlet that had developed since the 14th Century to cater for travellers. The decline of horses and the advent of mechanical transport negated the need to stop at Highgate and refresh, and traffic just passed through.

The work commenced on the tunnel without delay in 1810. In 1811, John Rennie a Scottish consultant civil engineer, was expressing doubts about the quality of the brickwork. The tunnel went in for 130 yards before collapsing in April 1812 suffering no loss or injury. The collapse rendered Hornsey Lane impassable and the project was abandoned. 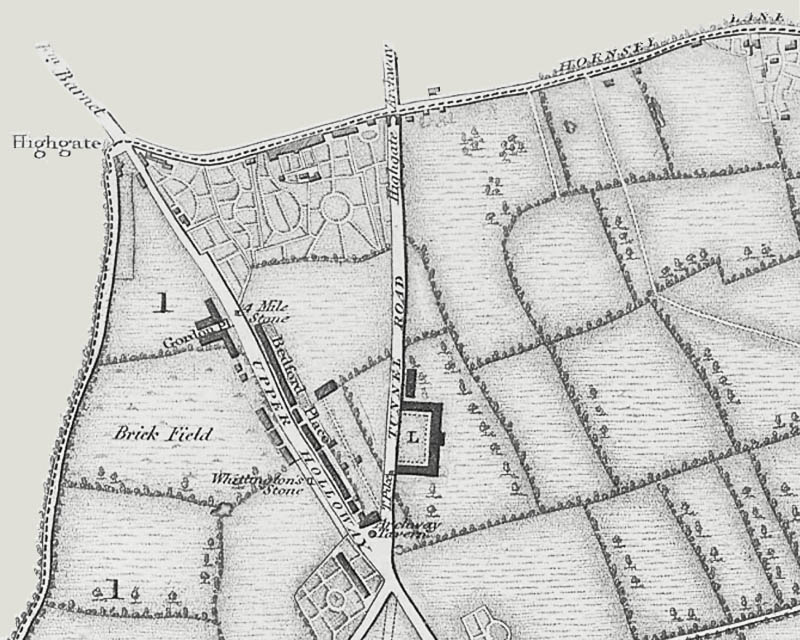 Map of 1805 showing the tunnel road. Note: Highgate Hill marked as Upper Holloway, the borough boundary marked as Hornsey Line. The tunnel is called Highgate Archway so perhaps the map is dated after the tunnel collapse of 1812.

The experience gained in boring through the London clay was useful to the engineers who constructed the early railway tunnels in the London area and no doubt useful to Isambard K. Brunel who planned his Wapping to Rotherhithe subaqueous tunnel in 1823 and finished it in 1843.

One assumes engineers considered building the Highgate Hill tunnel and then covering it with earth but the plan suggested by John Rennie and decided upon pretty much immediately after the collapse was to form a cutting to take a new road with a bridge allowing for the continuation of Hornsey Lane.

The bridge was designed of brick by John Nash, a British architect. The foundation stone was laid in October 1812 and the foundations completed a month later. A plinth bridge was built to hold a high multi-arched bridge, similar to a canal viaduct. The arch was 18ft wide and 36ft high. The bridge opened on the 21st of August 1813.

The road surface did not last well and some travellers returned to Highgate Hill instead. The problem required an improved road and in 1829 Thomas Telford was brought in to do it. He lifted the surface and laid a concrete foundation, the first time this had been done.

Ten years after the road and bridge opened the spoil from the roadworks was still heaped up on the Eastern bank. The company in 1822 having obtained a lease for 1,000 years for the land now had to remove it in order to site the Whittington Almshouses.

Note in the images below the large grass mound running all the way along the East side. In the first image you can see the height, the new bridge needed to be higher so it was moved a little further along. The second image shows the toll gate and what is stated to be the Archway Tavern, however, its looks like this building is on the land of the Holborn Union Infirmary which was built in 1879. as it appears opposite the toll which is the site on which the Whittington almshouse was built. 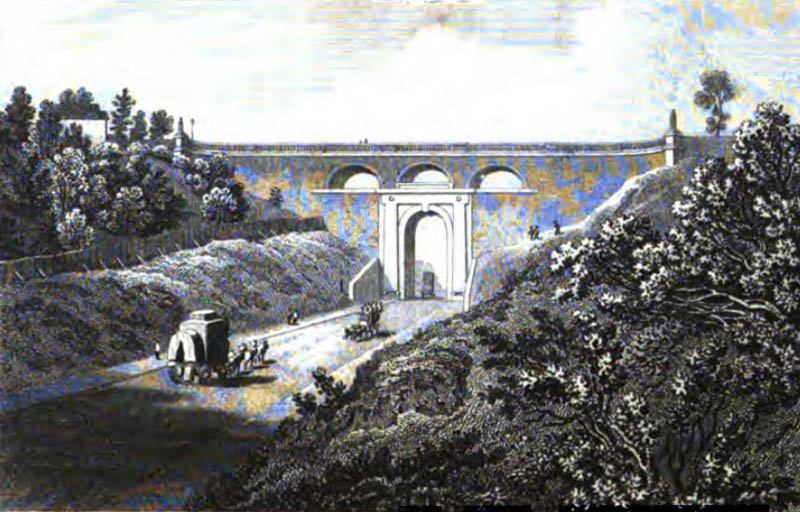 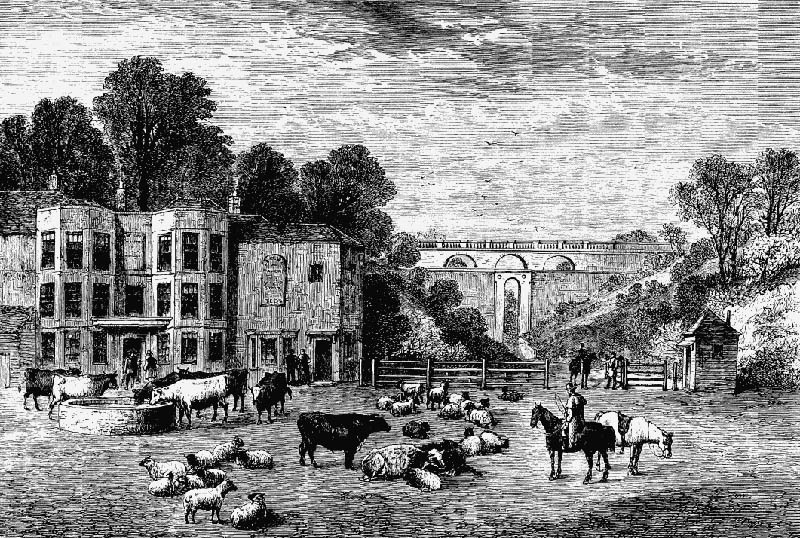 The increase of passenger services to and from London increased at this time as one might expect with the provision of a wider and lower gradient Archway Road. A daily coach left London for Finchley in 1817 at 4 pm and in 1826-7 one left the Queen’s Head, Church End, Finchley, for London at 8.20 am, returning in the evening.

By 1826 The Wellington PH opened at the junction with North Hill (long demolished). And in 1828 The Woodman PH appeared at the junction with Muswell Hill Road and opposite Southwood Lane. Both catered to travellers and played their part in reducing Highgate’s high number of purpose-built public houses from nineteen to just four.

Archway Road that passed under the Highgate Archway bridge now became a toll road from north London to the Great North Road. It had cost around £13,000, which was a large sum seeing that its length is only a little more than a mile. The toll was different from other tolls in that it charged not just the drivers of horses and vehicles, but foot passengers as well. 6d. for a horse-drawn cart or carriage, 3d. for a horse and rider, 2d. for a donkey and 1d. for a pedestrian. The toll remained until 1864. 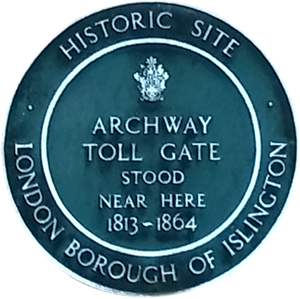 This wall plaque is situated where the Whittington Almhouse stood,
within fifteen meters of where the toll booth was situated.

The matter of turnpikes went before the House of Commons in 1861 which resulted in the Holyhead Road Act. Pavage grants had been issued in the 14th Century for paving of streets and markets and the turnpike trusts were based on that to apply for such time as was likely to be required to pay for the required works. The first turnpike toll appeared in 1663 for a section of the Great North Road and the first trusts followed an Act of Parliament in 1706. Their decline was due to the coming of the railway.

The Holyhead Road Act allowed the Highgate Archway Company to stay the interest and peripheral charges of the company and agree on a repayment of debt to the amount of £9,000 which was repaid and thereafter the toll closed. The Act’s purpose was to free trusts from forever making loan repayments and close the tolls. Highgate toll followed in 1876.

Until the Victorian age building took place in old settlements along existing roads. The cutting was described at the time as going through countryside with few buildings. This was because the area was always fields and the Archway Road was for all purposes the first development through there. The roads off Archway Road, such as Shepherds Hill, are fine examples of planned development of the late Georgian and early Victorian periods. The Archway Road ensuing north from the cutting is fronted by a wonderful high arched parade of late Victorian and Edwardian terraced housing with independent shops and flats above.

Increased traffic meant that the road required widening and Nash’s bridge was also too narrow across Hornsey Lane. Under powers obtained in 1894 by the London County Council a new bridge was built a few yards South of the existing structure (1897), and the old bridge was then dismantled (1901).

The new Archway Highgate bridge was a single span iron and steel construction of 120 feet designed by Sir Alexander Binnie, an English civil engineer famed for designing crossings over and under the Thames. It was estimated to cost £28,000 and in July 1897 a tender was accepted for £25,626 and the new bridge opened on 28 July 1900. 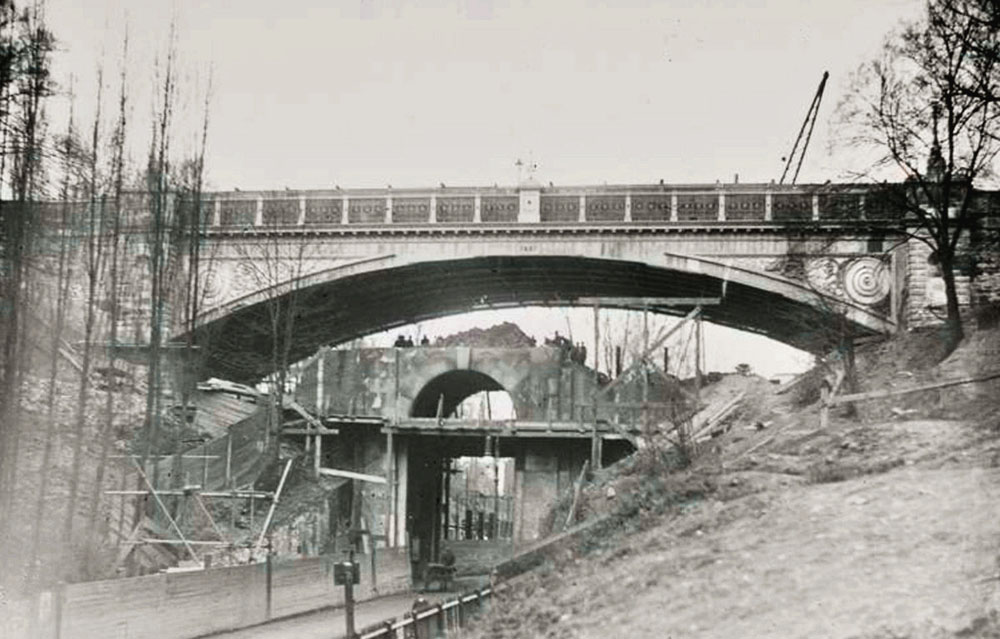 Highgate Archway Bridge – In with the new and out with the old. Source unknown: contact 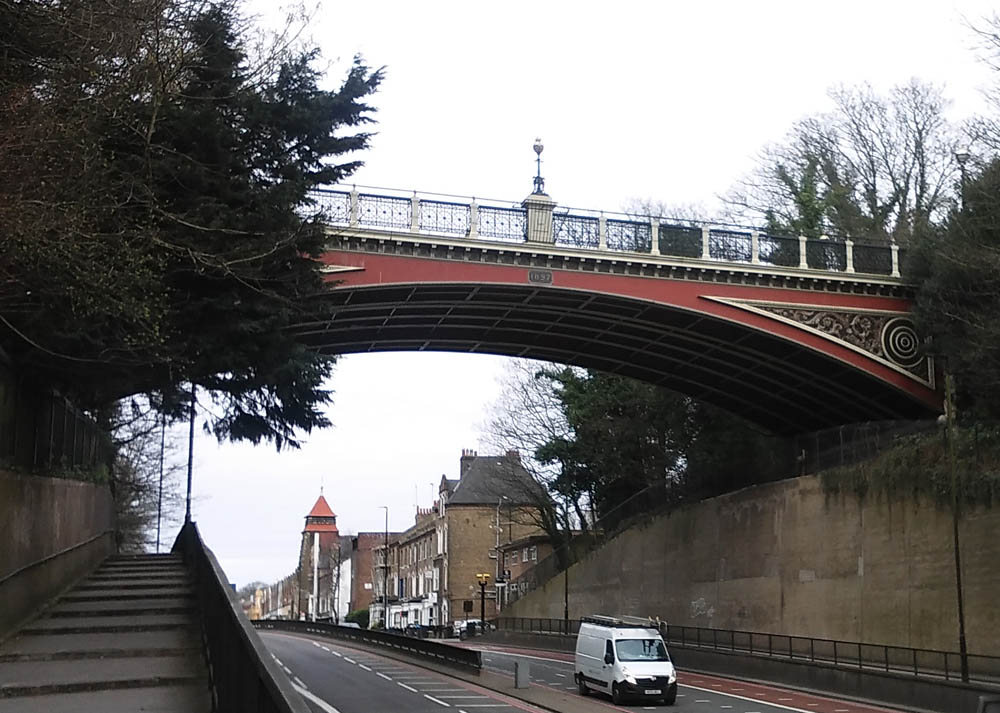 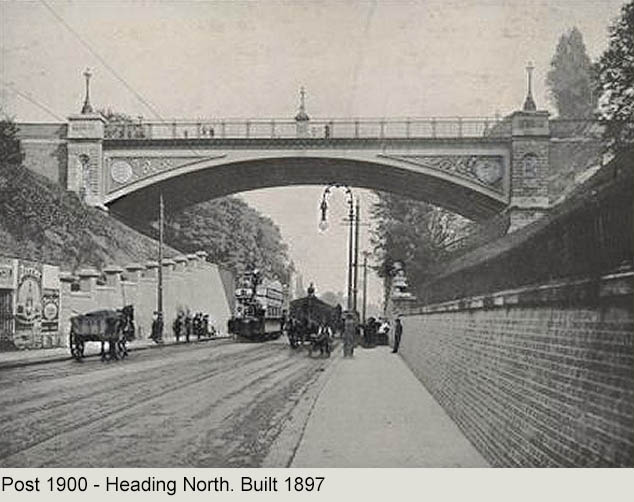 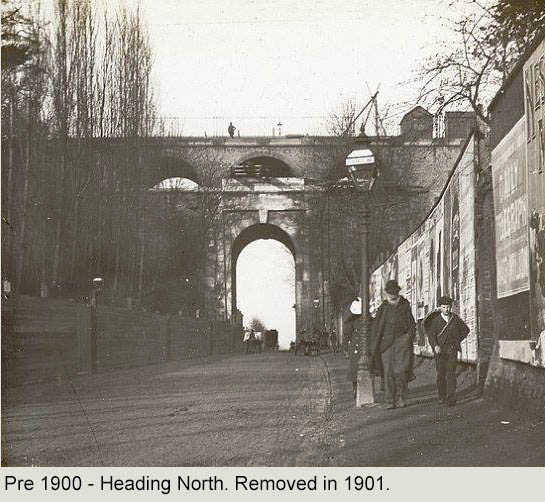 From 1954 The Great North Road was diverted around the congested suburbs of Finchley and High Barnet along better roads constructed from the 1920s. The next stage of development for Archway Road was in the 1960s when it was widened. Protests from the tenants of the arched parade ensured that those houses remained, as was the suggestion that they should be demolished. 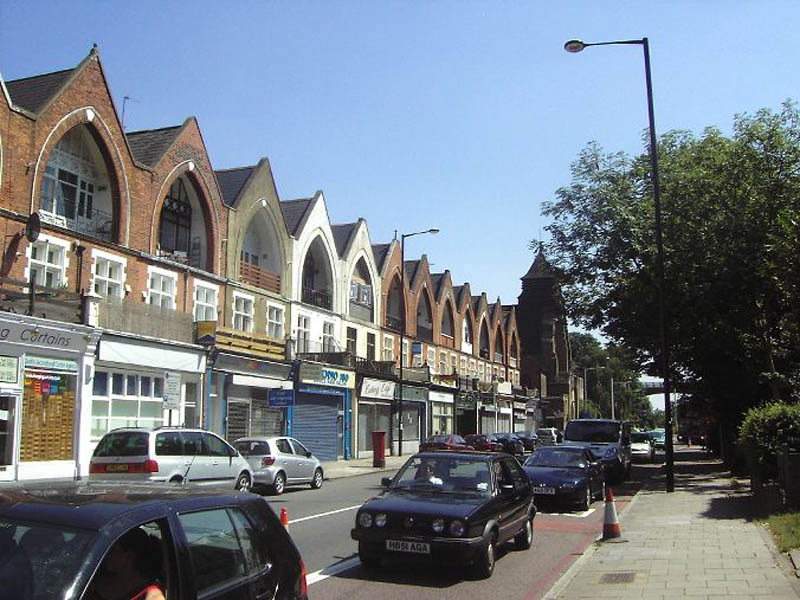 Archway Road looking towards Archway. You can just see Archway bridge in the distance.

In the 1960s the roundabout was constructed which left a few buildings isolated in the centre, namely the Archway Tavern PH and the Methodist Church. The tube station was redesigned in 1970 and this period should have marked a new beginning for the area seeing it transformed from a significant intersection into a modern region of North London and claiming its right to be known as a place. Instead it was the beginning of the end resulting in many thriving businesses dying out and Archway became just a place between places, that had a roundabout.